Past Splendour and Mgr Wallace 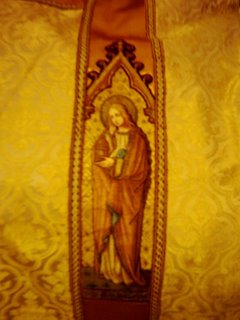 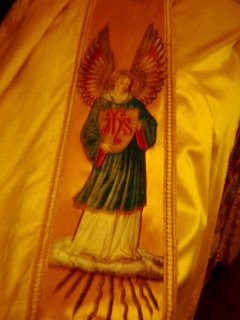 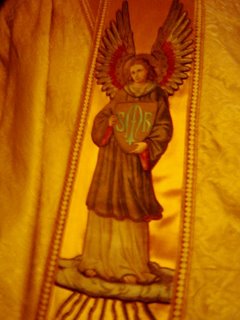 These are not very good photographs of some embroideries from some of our old vestments, the embridery is in good condition but the vestments are very worn.
These glorious angels are on the orphrey of the cope, Mary Magdalen is on a dalmatic. I have been told that they a from Flanders about 1930.
We'll vest the statue of St Mary Magdalen in them for here feast day.

I suspect they would have been acquired under Mgr George Wallace who was parish priest here during the war.

He was an Englishman brought up in France, he stuied for the priesthood at the Gallican College, for a while he was the Master of Ceremonies of Westminster Cathedral and oversaw its consecration. There is a story that he came to Brigthon after being sacked. The story is that the King of Portugal was to be received formally at Westminister Cathedral, in those days it meant great ceremonial, the Cardinal wearing a Cappa Magna and the King walking down the aisle under a canopy. Apparently someone, possibly the Cardinal ignored an instruction from Mgr Wallace, so he went off to say his Office. The ceromonial started to collapse, the Cardinal sent a message saying, "As long as you are Master of Ceremonies, I and everyone else will obey your instruction to the letter". After the liturgy the Cardinal asked Mgr what the contents of the message were, he repeated them, the Cardinal said, "That is right, however Monsignor you are no longer the Master of Ceremonies of this Cathedral". The Archbishop of Southwark heard the story, and because there was certain amount of attagonism between Southwark and Westminster, offered Monsignor St Mary Magdalen's.
During his time here time the liturgy flourished he encouraged plainchant, despising the polyphony of the other local parishes. There were apparently lots of vestments of this calibre which were sent off to Walsingham, who then passed them on top a protestant parish in Norfolk. Shame! These were apparently taken by a parishioner and returned when the clearing our bug had passed.

In his time apparently Belloc and Chesterton used to come and hear him preach.

One of our older parishioners remembers hearing Mgr Wallace saying in his French accent, during the war she thinks, "If you have troubles tell me, if you have needs let me know, I am your father, it is my duty to help".
Pray for his soul.

If you have any memories of him post a comment, indeed if you memories of Fr Joe or Canon Smith or any other priest let me know, if you have pictures I can post them.
at July 17, 2006

What is a Cappa Magna?