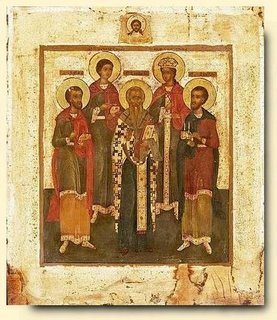 A late 19th Century Russian icon, it is most probably from Moscow, the clothing is delicately painted, the whole panel would have been gilded, and in this style it would have been paint over the goldleaf, the painted areas would have been varnished but not the gold, therefore the gold would have become scratched and has been lost in cleaning. The cleaning on this icon has been a bit aggresive, you can see the scalpel marks.

Back row Saints Panteilimon (physician) and Catherine, front row Saints Cosmos and Damian (physicians) flanking St Abbas, above the head of Christ. All the saints are named. Because of the proliferation of physicians I would like to think that it hung in a pre-revolutionary doctor's surgery.

It would be a great help to know which St Sabbas this is. He is certainly not the famous St Abbas who founded the monastery in Palestine, he according to the canons for icon painters should have moderate rounded beard.
So if you are an iconophile or have Russian Orthodox friends, let me know.

In fact there are several. From the Bolshakov Pattern Book published by the Society for Spiritual Enlightenment in Moscow in 1903 we find:

Unfortunately I do not know the Russian Painters Canons.