The Descent of the Holy Spirit: the liberation of the Cosmos 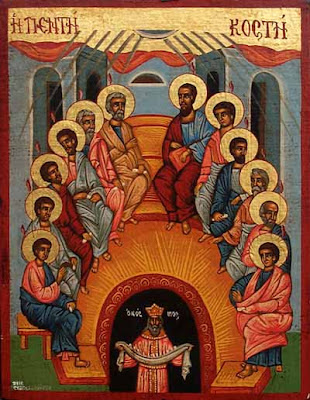 This is the traditional Byzantine representation of Pentecost.
To western Catholics it is strange not to see a representation of the Blessed Virgin, but her absence is of great significance, for she is already full of grace, she has already been filled with the Holy Spirit, she is Theotokos, the God Bearer. Here the Apostles too are transformed into God Bearers, bearers of the Word which they hold now in their hands.
Interestly, St Paul is represented here, as are the four Evangelists, thus the icon is not just about the day of Pentecost but rather the descent of the Holy Spirit on the Apostolic Church.
Coming, looming, out of the dark is the mysterious crowned figure of the Cosmos holding a sheet in which he bears but does not touch twelve scrolls. This figure seems to be referring to the "Word" being present in the world, though the world "knew him not", it speaks of the eternal plan for the Church and its inseperability from the Kosmos, for with the the Descent of the Holy Spirit upon the Church, the Cosmos emerges from its darkness, because the Church is called to liberate the Cosmos from darkness. Though the Cosmos has been in, and is surrounded in darkness, crown symbolises the annointing the created order received when the spirit of God hovered over the waters of chaos.
at May 11, 2008