New Social Encyclical in the Autumn 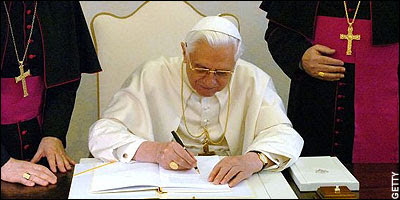 Cardinal Bertone has been speaking about the Pope's next encyclical.

What he said:
A new social encyclical by Pope Benedict XVI will probably be entitled Caritas in Veritate, Cardinal Tarcisio Bertone has revealed.
In an interview with the APCOM news agency, the Vatican Secretary of State disclosed that the Pope's next encyclical will not be ready for publication before the fall. "The encyclical is still being written," he said.
Cardinal Bertone said that Pope Benedict is also working on the second part of his book Jesus of Nazareth. The Pope typically devotes a substantial portion of his summer vacation to writing projects.
In his encyclical, the cardinal said, Pope Benedict "does not want to repeat obvious truths of Catholic social teaching," but will apply Church teachings to contemporary problems. "I am thinking of globalization and other problems, like the food crisis and climate change," Cardinal Bertone said.

We are very blessed with this Pope who reaches out to the world through reason and writing.

Speaking on Vatican Radio, Msgr. Volante said: "It is not ethically just to use food for purposes other than human consumption, when there are people who suffer from hunger.”

It poses an interesting dilemma for the moral concerns of environmentalism on the one hand and feeding the hungry and alleviating poverty on the other.

The Vatican directive seems to be saying it's morally wrong to use ethanol (alcohol) - intended for human consumption or human contact in medicines, flavourings, colourings etc - for fuel as well, used in heating and lighting and internal combustion engines.

So turning a radiator on is a moral problem!

"In the beginning God created Heaven and Earth."

Some time after, those with the muscle grabbed most of the earth, fenced it off and then allowed their fellow humans onto "their land" only when they had paid the rent they could wring out of them.

The same people then took control of the political system, entrenched their position (literally so) and fixed the laws so the robbery was concealed in a cloak of respectable legality. In reality, it was nothing more than a polite form of chattel slavery.

Over the centuries, this theft led to accumulations of money in the pockets of landowners, who, when the industrial revolution came, were the only ones able to take on the role of suppliers of capital, thereby enriching themselves still further.

And it still goes on under a veneer of civilisation, with sufficient being conceded in welfare handouts - state charity - to stave off revolution.

In the 109 years of Catholic Social Teaching, this fundamental evil has scarcely been spoken of. Might it be that this Holy Father will remedy the omission?

How very interesting, I look forward to the latest Encyclical from the Holy Father.