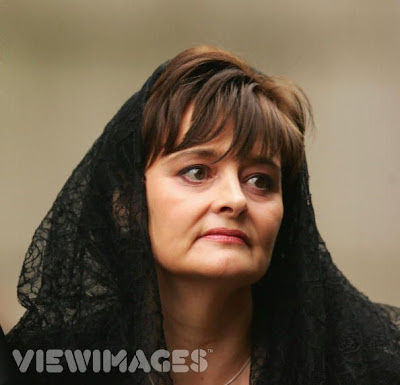 Every blog seems to have had a go at Mrs "B's" "contraceptive eqipment", the mind boggles. Paulinus also notes this:

When the Blairs moved into Downing Street, a feng shui expert rearranged the furniture at Number 10. Cherie wears a 'magic pendant' known as the BioElectric Shield, which is filled with 'a matrix of specially cut quartz crystals' that surround the wearer with 'a cocoon of energy' and ward off evil forces. (It was given to her by Hillary Clinton, another political spouse who combines the characteristic Third Way vices of sharp practice and bone-headedness). Then there have been inflatable Flowtron trousers, auricular therapy and acupuncture pins in the ear.

There was of course that Aztec rebirthing ritual t took part on a holiday in Mexico, "New Tony" after Tone had previously given birth to "New Labour". Let us say nothing of condom promotion at the Labour Party Conference.
In our multi-ethnic and diverse community it all makes it rather difficult when I try to discourage people from wearing talismans to keep off the evil eye when they come up for Holy Communion. There is something in the First Commandment about this, isn't there?
How much longer can we tolerate "leading" Catholics being lauded by eminent clergy, when their beliefs and practice give public scandal to the ordinary man and women in the pew? The silence itself is scandalous.
The Catholic Faith is not value free!
at May 14, 2008

What has happened is that Cherie Booth grew up insecure: volatile father,half siblings,confusion about her identity, and also very very bright. A bit gawky and wrong in every way except intellectually. Along comes Mad Carole Caplin, New Age Guru, who flatters Cherie and "ministers" to the areas in which she has always failed - self-image, clothes, lifestyle, social awkwardness, lack of close friendships - and Cherie is converted. Her New Best Friend flatters her enormously and for the first time, she meets someone who makes her feel good about herself (Cherie and Tone plc is pure ambition, politics and greed - both have a fatal flaw for money). The first commandment goes out of the window via the root cause - lack of proper affirmation from her parents, and the subsequent empty black hole that has left.

I know. It does sound horribly social-workery.

At one point I did make contact with the bishop who has special responsibility for the media, to ask him if he could explain to ordinary Catholics, for me, that the stuff that "leading Catholic" Mrs Blair was into was not really what the Church teaches. His reply was hilarious. He said "thankyou for your kind offer.. but I`m afraid the occult isn`t really my thing."

And, you know, that explains a lot. But that`s another story.

I think Cherie's completely lost, like a leaf blown around by whichever wind comes along next.

Cherie's public remarks about contraception are scandalous and hurt the Church. But, in contrast, how encouraged and strengthed we should all be by the example set by the parents of Jummy Mizen, murdered last week. Pray for his soul, for his parents and his 8 brothers and sisters.

I don't tolerate it Father, rather I simply don't have the power to do anything about it.

If those who do have such power choose not to exercise it they will have to explain that to God when their time comes.

Jesus doesn't offer much hope to those who cause scandal or allow it to happen when they have the power to stop it so I wouldn't like to be in their shoes when that time comes.

Hitlery was said to have "Channeled" Eleanor Roosevelt. Would that she'd "channeled" Phyllis Schlafly and Cherie Margaret Thatcher.

\I'm afraid this **** will continue to happen as long as the bishops lack testicular fortitude.

This is just another load of RUBBISH dreamt up by the "Gutter British Media".

We must constantly be on our guard,anti Catholicism is as rife now as it was in the 19th century.

Not a day goes by without some nonsense in the papers.

Margaret Thatcher (as well as being still alive and therefore unavailable for channeling) introduced into this country the most barbarous abortion laws in the western hemisphere; but that's all right, because she was a "conservative".

I could go on, but what's the point?

No, Ben, it is not alright that Margaret Thatcher introduced those foul abortion laws (actually, I seem to remember David Steel having more than a little to do with the introduction of the abortion laws).
The fact that Margeret Thatcher was a Conservative in other matters does not excuse her at all. Neither does being NuLabour excuse Cherie Blair. It is the fact that both she and her husband claim to be Catholics that is the matter in this case and the scandal which they both cause for their support of artificial contraception and also abortion and also the promotion of homosexual activities as in fundraising for them, that gives one to question what kind of "Catholics" they claim to be.

This post stands in such stark contrast with the one just before. Thanks for the juxtaposition Father, it is very illuminating.

That was my point, John. My comments were directed to Karen's remarks. Perhaps I should have used the [/irony] tags.