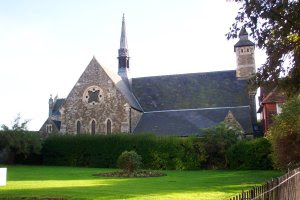 I am so pleased that Bishop Broadhurst and the congregation of St Peter's in Folkestone have announced their intention of joining the Ordinariate. Under PCC NEWS their website says the following:


At its meeting on September 28th, 2010, the Parochial Church Council of Folkestone St Peter unanimously requested the parish’s churchwardens to write to the Archbishop of Canterbury, our diocesan bishop, in order to arrange a meeting with him about the wish of many of the PCC and the congregation to join the English Ordinariate of the Catholic Church when it is erected. The PCC is anxious that this should be made as easy as possible, not only for them, but for the diocesan family of Canterbury that they will regretfully be leaving behind.

It is very important that their leaving and their reconciliation to the Catholic Church is accompanied by our prayers and is done as peacefully as possible but it is also important to recognise the heroism of this act for what it is. It is not easy to be the first but I pray the are the vanguard of many.
I do regret that their leaving again identifies dear "old mother damnable" to be nothing more than a liberal protestant  when she takes off her catholic ball gown. Now it is pretty clear that Anglicanism is no home for those who look to the Councils of the first millennium to define their "Catholic" faith, nor is it a home for those "protestants" who define their faith according to (that most Catholic document commonly called) the Bible.
There is now something new in Anglicanism: a single undeniable doctrine. The one doctrine which must be held without demur, is, "Women can be ordained bishops". One can be floating adrift in the Sea of Faith or manically swing a thurible but it is this doctrine arrived at by that most unecclessial method imaginable: democracy and her consort women's rights, that now unites believers in the church "by Law Established".
at October 17, 2010

Not entirely in agreement. It will be interesting to see how many will come over if the newly elected Synod of C of E makes room for them! Then I suspect the Anglo-Catholics will continue to be what they are - Protestants.

Check out the latest parish newsletter. After announcements in respect of "2010 bike ride", "100 club", "Advent Carol Service" and raffle ticket sales information for "Christmas Cakes and Chocolates", their impending return to communion with Rome finally gains a mention!

Amen, dear Father ! S. Peter's is a good and determined congregation, and both it and its clergy deserve our sincere prayers and support.

Yes this is the Church whose incumbent, Charles Ridsdale, Vicar of St Peters from 1862 to 1923, back in 1877 had to answer charges of Ritualism in the Judicial Committee of the Privy Council (aka House of Lords):

The Parish has a CofE Primary School attached to it, I have not seen any mention of what will happen to the school. Folkestone has a Catholic Primary School already but for Secondary School Catholics are bused to Dover.

It used to be said of a certain type of Cambridge High Church religion that it asserted "there is no God and Mary is His Mother".

I am inclined to disagree with pastor emeritus. It may be true that the composition of the C of E synod has changed a bit in favour of the traditionalists, but it will be deadlocked - a sort of hung parliament.

We can expect another 5 years of indecision from the synod, and the anglocatholic wing has not the patience for more years of debating.