A Day in Town 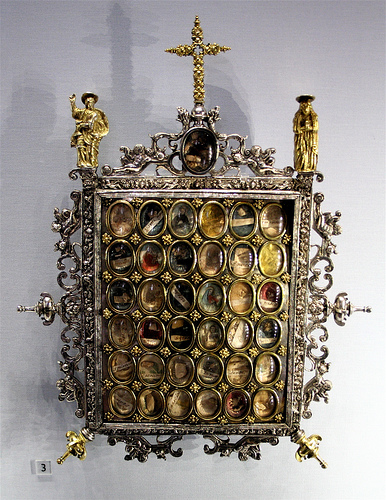 An early Mass this morning, alone apart from the court of Heaven then up to London. I had been looking forward to seeing the Treasures of  Westminster Cathedral exhibition but when I got there it was closed, I should have known when I saw a senior member of the cathedral staff striding off down Victoria Street, obviously with the keys tucked in his pocket.
The CTS was shut too is there a conspiracy going on?
A delicious lunch with a friend at what used to be the Hyde Park Hotel, why can't we have food and service like that it Brighton?
We dropped into the Oratory to see the new Newman chapel: quite pleasant, quite understated, quite English; I think the Blessed JH would approve.
Then off to the V & A to see the Raphael tapestries, I have to admit I am a philistine, I know people have raved about them but to me tapestries are a bit like wallpaper they are soft furnishings. I could appreciate the cartoons: the colours, the forms but the tapestries just looked dull, obviously they have lost their colour, the gold thread in them had lost its lustre, the vegetable dyes had lost their vigour, the whites are a dull fawn, I was quite disappointed.

I was much more excited by the Medieval Gallery but then it does seem odd to have objects of veneration; relics, crosses, statuary, vestment sterilised of their sacredness by being in a Museum, at least the V & A doesn't display ciboria or pyxes with the Blessed Sacrament spewing out of them like a communist museum of atheism but they do show relics as if the bones of the Saints of God are historical artifacts, would they do that if they were the remains of Australian Aborigines or Native Americans?

I understand they do the same Westminster Cathedral, so maybe it was providential it was closed!
at October 11, 2010

hope you get to see it soon it's good

It was seeing the artistry of the medieval period that really challenged the false history I had absorbed over the years. Hungry and ignorant people do not produce this level of perfection and beauty, the likes of which we have never seen since thanks to the English Deformation.

When we recently visited the new Medieval GAlleries at the V&A, apart from hankering after some of the beautiful vestments on display, we did wonder how on earth a museum had got hold of an ENTIRE renaissance Chapel and several altarpieces, which seem to have been acquired in the 1920s.
Are sacred objects to be traded as merchandise?

I have always been slightly disturbed by sacred objects in museums, and that includes the Sainsbury wing of the National Gallery.

The items are well-nigh impossible to interpret in a museum context.

I went to the Treasures of the Vatican exhibit that came to Toronto for World Youth Day in 2002. I and a group of Catholic friends went in there and were the only people there who knew what we were looking at. We attracted some attention by making the sign of the cross and praying in front of the relics of a 3rd century saint. The attention turned into questions from passersby, and in the end, we did an impromptu tour of Catholicism. Even the guards were fascinated.