Red Hats to Ranjith and Bartolucci but not Vin 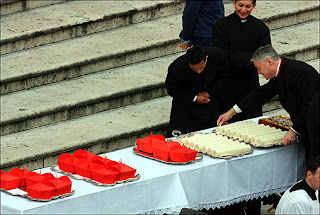 The Holy See has announced the appointment of 24 new Cardinals.
In the Roman Curia, welcome but not surprising is the elevation of Archbishop Burke, absent is Archbishop Fisichella, the President of the new Pontifical Council for the Promotion of the New Evangelisation:

Archbishops of Major Sees, I am surprised the Archbishop of Westminster has not been made a Cardinal and will presumably have to wait until Cormac is eighty. It is good to see Archbishop Ranjith amongst the new Cardinals:

Those over 80 are those without voting rights, it is good to see included is Domenico Bartolucci, the former perpetual maestro of the Sistine Chapel who was treated shamelessly in Vatican liturgy-wars in the earlier part of JPII's reign and sacked. His Cardinalate is the ultimate rehabilitation and vindication:

Great news for Sri Lanka and the UK! We don't need another Cardinal - two are enough.

I am delighted that Archbishop Ranjith is now a cardinal! He is one of the best prelates in the world

Daren't write more - you all know why!

A rather predictable list, especially concerning the curial elevations.

It is a great pity that Benedict has not scattered more red hats where the vast majority of Catholics live. It is, I believe, time for the college of cardinals to more accurately reflect the composition of Catholicism. Some may say that the number of voting cardinals is limited to 120, but that is something that any pope is free to change.

I must say that I am disappointed.

There are those who do not accept the legitimacy of U.K. rule in Northern Island.

Perhaps Sadie Vacantist is one of us.

Sorry Father Coyle, and everyone, NORTHERN IRELAND, not Northern Island. And I haven't touched a drop today.

Ahem..., Fr. Coyle, the wonderful thing about the RCC in Ireland is that it covers 32 counties not 26, so according to the Catholic Church we are a united Ireland in the Lord. The Archdiocese of Armagh, the seat of the Primate of All-Ireland was founded by St.Patrick in the mid 5th-century. It has 61 parishes covering north and south of the border.

It has nothing to do with England or the English Hierarchy. Ahem....

I see it is time that the Catholic Church in these islands returned to lessons in Church History and Politics. The UK is a United Kingdom of Great Britain and Northern Ireland. it is therefore a unison of territories. Furthermore, diplomats are accredited to the Court of St James and the term commonly used is Great Britain. As far as I know and was taught this at an early age, the UK is not recognised by the Vatican. however, whatever the history, the facts and the sensitivity of it all, the Church in Ireland needs to stop using the term UK as Veritas is forever doing and as for our Bishops in Great Britain, the Pope did not make a visit to the UK but to Great Britain. State visit or not, the prayer card could have easily stated great Britain or more accurately England and Scotland. Whoever is right, whatever the opinion held, let us seek clarification as we need to seek it on so many other matters in life.