Son of Siri to Congregation for the Clergy 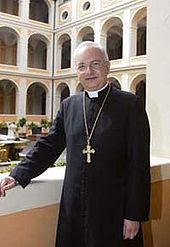 
Mauro Piacenza (born 15 September 1944) is an Italian prelate of the Roman Catholic Church. He currently serves as prefect of the Congregation for the Clergy in the Roman Curia since his appointment by Pope Benedict XVI on7 October 2010. He had previously served as secretary from 2007 until his appointment as full prefect in 2010.

Piacenza was born in Genoa, and was ordained to the priesthood by Giuseppe Cardinal Siri on 21 December 1969. After serving as a parochial vicar, he worked as Chaplain and later Apostolic Delegate to the University of Genoa. Piacenza taught canon law at the Theological Faculty of Northern Italy, and held several other curial and teaching posts. He was made a canon of the Genoa Cathedral in 1986. Entering the Congregation for the Clergy in 1990, he was named its Undersecretary on 11 March 2000.

On 13 October 2003, Piacenza was appointed president of Cultural Heritage of the Church and Titular Bishop of Victoriana by Pope John Paul II. He received his episcopal consecration on the following 15 November from Tarcisio Cardinal Bertone, SDB, with Darío Cardinal Castrillón Hoyos and Bishop Alberto Tanasini serving as co-consecrators.

He was later named President of the Pontifical Commission for Sacred Archeology on 28 August 2004, and then Secretary of the Congregation for the Clergy and Titular Archbishop (with the same title) on 7 May 2007.
at October 07, 2010

His list of consecrators is impressive to a trad. observer. And I am glad to see that you say he was "consecrated", (albeit "episcopally"),rather than "episcopally ordained". Can we not get back to the idea that, from time immemorial, in the English language, bishops have been "consecrated"?

I think "protege" might be a better word than "son"! For a fleeting moment, I had a vision of Siri as one of those renaissance Popes, promoting his "nephews" to positions of power and influence.