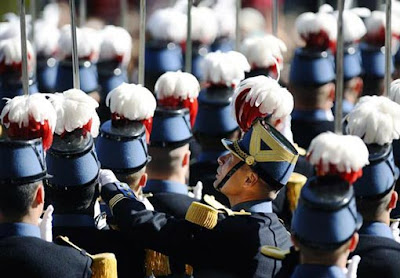 One of my parishioners belonged to one of those upper class European Catholic families, he was  half French, a keen huntsman, with a military background and belonged to one or two of those Catholic chivalric orders where you have to prove your poshness by demonstrating that not only you but that your great, great grand-parents were armigerous.

He told me a story of a cousin, a retired French cavalry officer his eldest son had been thrown out of St Cyr, France's Sandhurst he had been getting involved sex, drugs, fraud and other crime had given up the faith and had little do with the family. Eventually his father decided enough was enough, letters, entreaties, ordinary prayer and penance had achieved no result and so he decided to offer The Grand Sacrifice: his life in exchange for his son's soul. He gave away his personal property and prayed that God would take his life in exchange for son's immortal soul. Within a year he had died of some truly painful desease and within eighteen months his son had entered an austere traditional monastery and is apparently still there.

Although it is good story of paternal love, in a rather militaristic way, it all seems a little frenchified to me, a bit distasteful too but I have dim memories of similar stories from French literature and hagiography.

I think this is wonderfully inspiring. That's what love looks like.

I agree with Basil!

Does the encouragement to "Offer it up" form any part of Catholic upbringing or education nowadays? It seemed a good training in voluntary and loving self-denial for young souls.

Very inspiring. Thanks for this.

What father would not give his life for his son's salvation? How could such a story be distasteful?