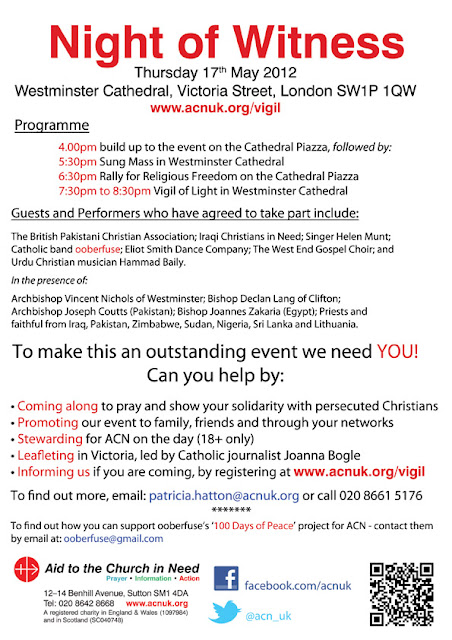 I just received the following email:

Happy Easter to you!


I work in the Fundraising and Marketing team at Aid to the Church in Need UK. I’m emailing in the hope that you won’t mind giving a plug on your blog, to the ‘Night of Witness’ event to support persecuted Christians that ACN is organising at Westminster Cathedral on the evening and night of Thursday 17th May.


ACN’s Night of Witness is the biggest event yet that ACN has organised. There is an extensive line up of inspirational guests and performers on the night, including several bishops from around the world, as well as Catholic band ‘ooberfuse’ – who had the winning entry for last year’s World Youth Day song contest.


This event gives us a crucial chance to stand together with our brothers and sisters around the world who are suffering persecution, in what is now a highly fraught era for Christians worldwide.


I know that you have posted in the past on the plight of persecuted Christians, and I hope this event may act as an opportune link for you to write a new piece should you feel inspired to do so. Of particular note, in recent weeks we have received the news that almost the entire Christian population of the Syrian city of (50,000 or more people) has fled violence and persecution engulfing their homeland. As you will know, other high-profile (though not as high profile as we would like) issues include the current detention, awaiting execution, of Asia Bibi on blasphemy charges in Pakistan; the similar detention of Pastor Youcef Nadarkhani on the same ‘charges’ in Iran; and, on a more positive note, the recent suggestion by Cardinal O’Brien that murdered Pakistani politician Shahbaz Bhatti might be made a saint for his heroic witness to the faith. Other recent news stories can be read on our news page here: www.acnuk.org/news


I attach a promotional flyer for the event in .jpeg format. The reverse of the flyer gives more details of the schedule and line-up on the night.


Many thanks in anticipation of your help and your prayers.

Aid to the Church in Need is an exceptionally good organisation with an exceptionally important mission. I hope this event will raise the awareness about the widespread persecution of Christians around the world, and our duty to fight the injustice and to help those suffering for the Faith.

Aid to the Church in Need has received awards in the past for great organization. I know of several people who work for free for this charity and they are very dedicated in spreading the message of the Gospel to places sometimes ignored by the media. God bless their efforts.

People might ask themselves "When was the last time I heard in the Bidding Prayers at Mass specific prayers for persecuted Christians rather than anodyne and platitudinous references to peace and justice?"

As long as the advertised 'musical' elements confine their activities to the piazza this is worth supporting. As a result of reading this post I'm making an extra donation to ACN.

Why are we walking for religious freedom? What about liberty of the Church?

ACN do great work, and are about the only non-pro-life charity worth supporting of course.