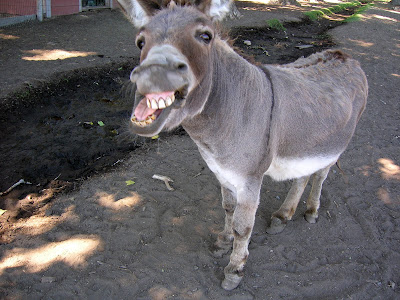 If Palm Sunday falls on April 1st, reports of donkeys being used in the liturgy are unlikely to have been the result of any liturgical abuse..

Looks like Ms. Pelosi must have sent a representative.

You mean that the donkey isn't in the rubrics?

But Father I've bought you one as an Easter gift. I thought you could train it up to take the Offertory collection-can't guarantee it won't chew the basket though. And when he's not on Christmas crib duty you could take him down on the beach and offer donkey rides to raise some extra cash for the parish.
A donkey's not just for Chrismas you know.

Does Mabel not exist then?! I really imagined her waddling along the road nearby. I once turned the corner in Paris to see a dozen donkeys being led through the traffic on the road - and it was not April lst.

Surely the item on the Radio 4 Sunday programme was an April Fool joke.

The Rustlers have been so busy acquiring Donkeys that some Parishes have had to use Llamas.

It's a miracle there was any room for the congregation in some places of Worship and the constant braying would have drowned out the Choir.

You're probably aware though that a real donkey or a wooden one were a part of the Medieval Palm sunday processions in many European countries. Some beautiful wooden ones; usually with a Christ figure astride the donkey, found their way into museums. I remember reading that one such example was tossed into Lake Geneva by Protestants because it was too Popish!

Nickbris, I think that was Radio 4 April Fools Day broadcast.

Jdirishdad,
What we have are images of Christ mounted on a donkey, it is Christ that is central, the donkey is peripheral.

Processions are about worship, or movement with Christ, never are donkeys part of Christian worship.

Though at one time bishops did ride white asses in processions.

I could not help noticing that the word 'colt' was used this year Gospel for Palm Sunday. Is this the new translation or have I not being paying attention in previous years?

Oh,silly me Father.It did sound like the most plausible of all the garbage to come from the BBC.

I've never forgiven them since they kyboshed Radio Caroline.

It won't be the new translation, which doesn't affect the lectionary. Mark's gospel (OF Year B) has 'pullus' in the Vulgate, which is usually rendered as 'colt' although it can be used for the young of any animal. Likewise Luke. Matthew (OF Year A and EF) tells of the disciples loosing a she-ass (asina) and her colt. John has Our Lord riding a young ass or ass's colt (asellus).

Yet Father, the Church Fathers attached a lot of significance to the two donkeys, waxing eloquent about their symbolism.

The mature donkey signified the Jews and the colt signified the Gentiles. Whether Our Lord rode on each of them or not (the journey from Bethphage/Bethany to Jerusalem was only a mile). The significance of two Disciples sent to procure them - prefiguring Peter as the “Apostle to the Circumcision (the Jews)” and Paul as the “Apostle to the Gentiles”.

Ambrose draws attention to the ‘loosing” of the donkeys (…”bound before the gate without”) as a symbol of Our Lord loosing mankind from sin. St. John Chrysostom goes to town on the donkey as symbolizing mankind before the coming of Our Lord: “…more unintelligent than other beasts of burthen, stupid and weak, toiling under a load.” Jerome sees the she-ass as symbolizing Eve and the colt the Gentiles. Origen recalls the prophesy of Zacharias that the King of the Jews would come “…poor, and riding upon an ass…”

But for me the Irish preaching of a generation ago spoke about the cross found on the donkey’s back as ennobling the animal, deemed dumb and stupid by most people, yet chosen by Our Lord - just as He chose simple, unlettered men to preach the Gospel and calls each of us, unworthy as we are, to eternal happiness in Heaven.

Did the Vicar of Bray use a donkey in the liturgy?

Well Fr. Coyle, one could say that as the Vicar of Bray had made an ass of himself many times, there was a donkey present at the liturgy.

The Donkey has been rewarded with a cross upon it's back.

Every donkey, even black ones, have an even blacker cross on their back.

A Donkey's bray was given to him when he wanted to warn Joseph the enemy was near and did not have a cry loud enough or different enough to get Saint Joseph's attention.

The Donkey signifies Salvation is from the Jews, the colt signifies the Roman Catholic Priesthood, which precedes the Jews.