The End of Easter Week 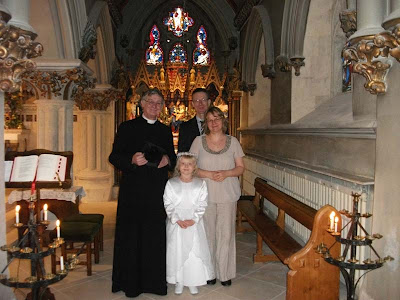 Sorry there hasn't been much up for the past week, like most priests Holy Week really is tiring, most of my confreres tend to take a holiday around now, I just love celebrating the the whole octave of Easter. I can certainly understand understand why some commentators are suggesting that the Holy Father is "looking tired and drawn" but then I am not celebrating my 85th birthday, nor have I preceded Holy Week by a trip to Mexico and Cuba.

The Triduum here was incredibly beautiful, bit simpler than most years, we just followed the Missal and did our best to let it speak for itself - the choir are getting better and better.

Easter week ended rather beautifully too, we kept Divine Mercy Sunday, really for the first time, as Divine Mercy Sunday, I was bullied by the charismatics in the congregation to have the Divine Mercy chaplet and Benediction at three o'clock; one of our Polish parishioners had given us a large picture of the Divine Mercy which was venerated, then later on there was Mass at a 5pm followed by the Traditional Mass at 6.30pm.
There was a largish congregation for the Traditional Mass which was very good as Lilly made her First Holy Communion. the first I have done in the Traditional Rite. She was beautiful, quite excited by the idea of receiving her Divine Lord for the first time but quite recollected and serene. We put a kneeling desk covered with an old cope between the kneelers and her parents Birgit and Achim knelt either side of her throughout the Canon of the Mass. One of our older parishioners said he wept at her recollection and and obvious joy. Pray for her!
After Mass I went out to dinner with two of our parishioner, one a student at the university here in Brighton who in the summer is going off join one of the new religious movements who celebrate the old Mass exclusively, his younger brother is going with him, and the other a young professional who is joining a community here in England which is progressively celebrating the Traditional Mass more and more - pray for them!
The trouble is that when these two go there will be no-one to MC a High Mass - so pray for us!
Deus providebit - I hope, he generally does.
at April 17, 2012

We had the Divine Mercy Benediction and Mass followed.

There was a sea of people for confessions. Five of us heard Confessions for a solid 50 mins.

We remembered in our prayers the centenary of the Titanic maritime disaster. The three Catholic priests who stayed on board hearing confessions and giving general absolutions and saying the Rosary. Frs Byles (42), Montvila(27) and Peruschitz(41).

Such bravery and such great Faith in God. 1500 died - such a tragedy. Had they listened to the Marconi transmitter, they would have known about the icebergs.

Also we prayed for the 23rd anniversary of the Hillsbrough disaster killing 93 people.

The Divine Mercy of God we need it always.

It was lovely seeing Lily make her first holy communion.

In Easter week the liturgy suggests that each day, like the Sundays of the year, are little Easters. So should we be bound to abstinence on the Friday of that week?

The Friday of Easter Week and the Friday of Christmas Week are not binding from meat abstinence. Neither here or in Rome.

That is my understanding. if I need to be corrected, please tell me.

It is less a case of you being told, Father, if you are wrong than of the "people in the pew" being told if you are right!

I was being gentle.

I am right in saying what I have already stated.