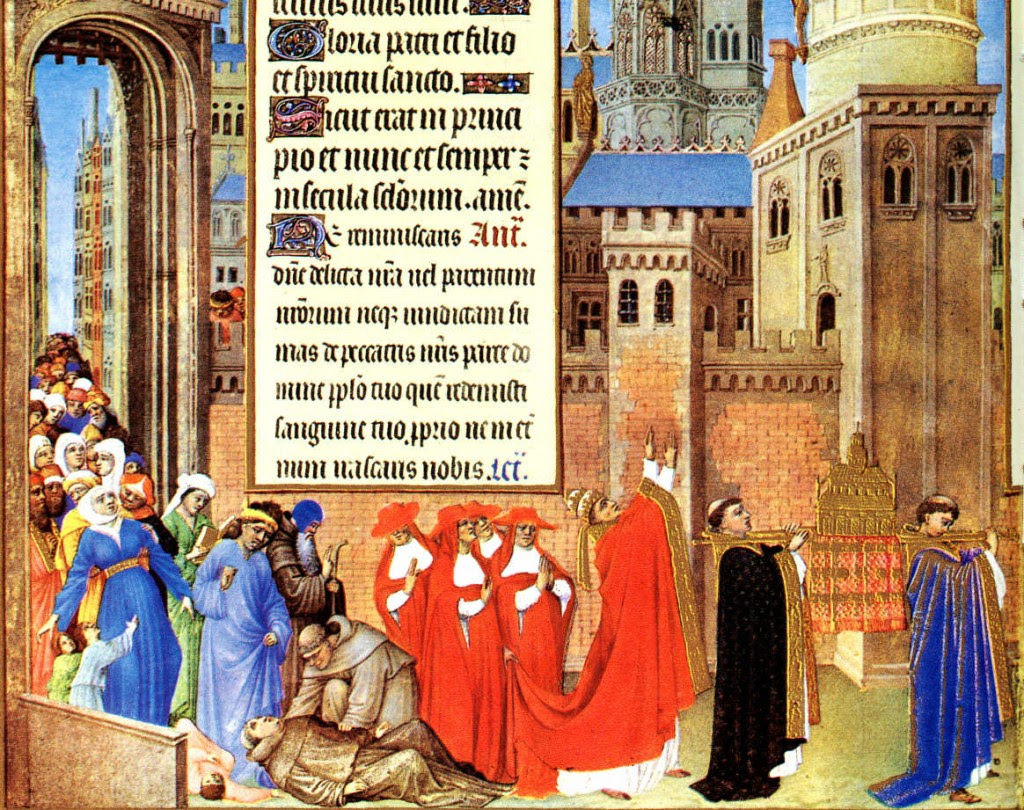 Holy Week begins, and ends, with a procession.
Processions were very much more significant in the pre-concillior Rites than they are in the present liturgy. It is worth meditating on their significance.

Processions are essentially about moving with Christ, as a sacred community. Vatican II uses the metaphor of the procession, "the Pilgrim People", to speak of the Church, it seems a shame that their significnce has actually dimished.

In the Medieval world processions were designed to demonstrate and show the nature of the a Christian society, as much as the heirarchic and salvific nature of the Church. The Roman Stational Masses took the Pontiff on a tour of his diocese, presumably, at least signifying that the Bishop of Rome had nowhere permanent to lay his head. In the rites used in England the procession was an essential part of the rite Palm Sunday, elsewhere the taking of the Blessed Sacrament to some other place, often an altar in a cemetery was part of the usage of Holy Thursday.

The phrase "Creeping to the Cross" suggests quite clearly the ancient practice of the whole local community slowly, often on its knees, with great ceremony coming to venerate the either the Cross itself, or the recumbent figure of the crucified, a time for mourning and public grief and penance. For the mass of people this rite itself, as we see still in the great Holy Week processions of Spain was, rather than the Chuch's official liturgy, the great popular re-enactmenet of the Passion.

The Stations of the Cross, is essentially a processional rite, again in which we learn to conform ourselves to the Crucified.

The rather hodge-podge rites of the Easter Vigil begin with the blessing of what was presumably a newly kindled Easter beacon and the taking into the church (often as quickly as possible - lest it blow out) the lit Paschal Candle. Again it is rich in significance: following Christ, the tiny candle flame in the dark at the beginning, in the glowing shared  light; it is metaphor of faith, that leads to the unlocking of the mysteries of salvation.

The readings themselves are a procession, from creation to salvation.

The procession to the baptismal font (strange there is no procession from it) gives a wonderful image  of the local Church together with Saints in Heaven interceding for those to be baptised, it is about what Christ has already won for us.

And ...celebrating Mass ad Orientem is processional, and directs us to the eternal destiny of mankind, the Eucharist and the worship of the Eternal Father.
at April 02, 2012

I am rather baffled by this statement and wonder whether you might develop it further:

'Vatican II uses the metaphor of the procession, "the Pilgrim People", to speak of the Church, it seems a shame that their significnce has actually dimished (sic).'

Now, it is perfectly true that there are fewer ceremonial processions in the street, at least in England, but think about how procession is brought into the liturgy within the Church. In the 'old' Mass, there was no procession by the people. In the General Instruction of the Roman Missal, the Offertory procession is made a crucial element of the mass. While not mandatory, it is considered 'praiseworthy' that there should be a participant procession by the people bringing forward the elements and their gifts, rather than the collection being taken and smuggled into the sacristy by the same door.

No less important is the notion of the Communion procession, with reception commonly in procession. This emphasises the coming forward to receive the Lord by those present in the way that simply old style lining-up at the communion rails did not.

If procession is thus built into the structure of every Novus Ordo mass, as it never was in the former days, it seems weird indeed to say that it has 'diminished (sic)' post Vatican II. Changed, in most parishes, certainly, but treated no less centrally, and made a part of the quotidian, not a rare event for special holy days.

I am in my 60s and a 4th generation Australian of predominantly Irish stock, and I miss the processions of my childhood. I never see little girls in their white dresses and veils anymore walking in front of the priest, dropping rose petals before the Blessed Sacrament he is carrying in the Monstrance or before the bearers of a statue of Our Lady.

And Michael 1, I'm glad to say that altar rails are making a comeback in my diocese. Only in a small way for now, but the number of churches where communicants kneel and hold the plate under their chin to receive Our Lord on the tongue from the hands of the priest has increased from one to two. It's a start! I find this mode of receiving Holy Communion a more reverent experience than lining up and sticking out one's hand to take hold of Christ.

There is a misrepresentation, or at least a misunderstanding of what I said. I did not suggest that pre-Vatican II there were no processions. Father Blake rather makes my point for me by listing the special occasions when processions took place, though my recollection is that in most parishes most of the processions did not take place. My point was that in the present mass, properly celebrated, procession is the norm.

First let's look at the procession of Offertory gifts. In the parishes I know, it's the same people week after week. Frankly, I'd rather have the money baskets taken to the sacristy than at one church where the crashing coins are serially tipped into one basket hard by the organ loft where the choir is trying to sing.
The procession to Holy Communion is not new. The difference between then and now is that then the procession ended at the altar rails where everyone knelt in humility to receive the Body of Christ.
Public processions in the olden days were popular expressions of joy of a great feast of the Church. My schooldays in summer were punctuated by processions in the streets around my school, and at others, accompanied by lusty hymn singing. We loved them, (not least the celebratory feast afterwards), and to hold the banner or one of the streamers was an honour to be coveted. We were catechised well enough to know what we were doing, why we were doing it and wanted the world to witness our belief.

Michael,
I am not sure calling a queue a procession actually makes it so.

Father Ray - regarding your last paragraph do you have plans for continuing to celebrate ad orientem after Easter? The roof has not fallen in and we have not been plagued by boils, frogs or anything else!

I had not thought of this as being processional before but have always thought it more logical and prayer seems so much easier when the Priest is leading us in the same direction.

When everything got changed round it seemed so odd for the Priest to recite the Confiteor facing the congregation seemingly eliminating God. I believe this is known as the closed circle. Your own standing at the side in the NO avoids this and draws us to God but I have never experienced it elsewhere.

Georgem, Those of us Eastern Rite Catholics (the 1%) love our processions - but we would never dream of kneeling to receive Communion. We stand in awe. We hold to the ancient belief that it is not proper to kneel on the day of Resurrection.

Pelerin,
Yes, I think so.

WONDERFUL - Fr Ray - THANK YOU! Life gets better and better these days.

Church processions in some predominantly Christian countries like Italy,Spain & Portugal are great occasions and attract huge numbers of tourists. Now that the secularist atheistic heathen have taken control here a procession is seen as some sort of demonstration to bring about regime change in another country.

One would have to jump through hoops to get permission from the City Council,Police and other assorted Health & Safety jobsworths.

I think it is a shame more priests don't celebrate mass ad orientem.

Also processional is the traditional Western church plan. The long nave (as well as the soaring height) carries one in procession from the World to the Tabernacle wherein resides the presence of God Himself. Wonder of wonders, though we are unworthy to step foot in His heavenly domain (behind the altar rail/rood screen), our God comes to meet us in a Communion of flesh at that very boundary between this world and the next.

Rather than a central-plan church, signifying the presence of God in all things (true though this may be), traditionally Western Christianity chooses to express in its buildings the fact that this life is but a preparation for the next, that we are on a purgatorial journey to someplace "further up and further in," and that even our Communion with God at Mass is but an anticipation (though effectual) of that final glory.

Like Petrus I wish that more churches, including the one I worship at, had the priest celebrating ad orientum. Alas, with a change of priest recently we no longer have the ER and the readings at the Easter vigil were heavily abridged.

That said, thank you for your blog Fr Ray. It's oasis.