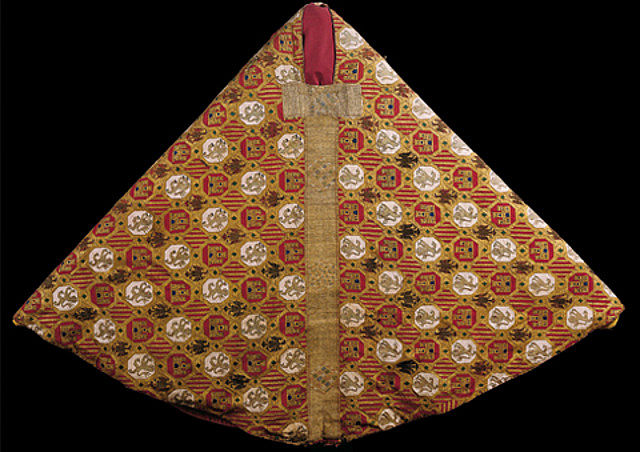 New Liturgical Movements has a picture of a thirteenth century chasuble from Toledo. I used to have one in this shape, I gave it away to a priest who liked I it, I must admit I did too.
It was the ancient shape of the cape or over coat worn over the tunic, it should come down to the knees. It is made from a semi-circle of fabric, with orphrey uniting the straight edge and giving a little extra movement so it isn't exactly 90 degrees.
In the West it was gathered up in the crook of the arms, giving it rather beautiful folds, with more or less an equal amount of fabric front and back, in the East in was worn so the back looked more like a cope and the front had less bulk. But East and West used the same vestment.
This is the vestment that the traditional Roman presumes the priest is wearing, hence he is supposed to be helped with it when his hands drop below the elbow, for example at the incensation. Worse problems are encountered at the elevation of the host and chalice, the server literally has to lift the fabric of the chasuble to enable the priest to raise his hands so the host might appear above his head.
Though the Gothic shape goes back at least to the 12th century, earlier the the Toledo chasuble, below is the Becket chasuble at Sens. Pugin favoured the Gothic version coming to the elbow joint, made with an angle of approximately 135 degrees, the prohibition of such garments by the Sacred Congregation of Rites was one of the issues that led to his increased neurosis, and eventual madness. Eventually the Comgregation allowed vestments that came either to the shoulder, elbow or wrist, the angle of the cut was not considered.

The 90 degree angle and the circularity was previously significant in so far as it was related to the square, a symbol of the universe, of perfection: the three corneredness to the Trinity.

This is a very interesting post. Thank you Father

Which one is the most comfortable to wear during Mass? Which one do you think is the most beautiful in style?