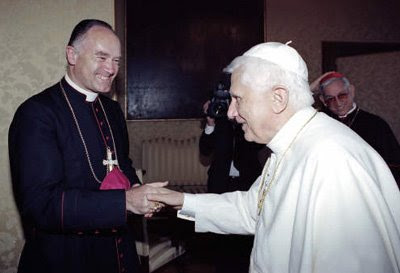 This coming Sunday,  Low Sunday is the deadline for the reply of the SSPX to the the Holy See's Preamble. On it hangs either a schism or reconciliation, if schism then presumably there will follow further excommunications and a change in gear to any dialogue. If there is reconciliation then within the Church there will be groaning from the Liberal elements within the Church and cries of "the Pope rejecting Vatican II".

Interestingly Bishop Fellay says the SSPX accepts 95% of the teaching of Vatican II, which is perhaps far more than most "orthodox" bishops and clergy accept.

John R. T. Lamont has a very interesting analysis of the situation.
The problem seems to be the secret Preamble and as Lamont says the ultimate question, which is: what is the authoritative teaching of the Catholic Church on the points that are in dispute between the SSPX and the Holy See?

What is in the Preamble and why is it secret? If it is merely concerned about religious liberty, collegiality, ecumenicism etc. these issues per se are discussed pretty freely by clergy "in good standing", so presumably there is something else. The more specific criticisms of the SSPX in the past concern the Assisi events, the toleration of dissent, the relationship of conscience to the Magisterium, the use of Collegiality, and the Liturgy. Indeed the SSPX when pushed would seem to say it is not so much the specific documents of VII that are a problem, except where they contradict the Magisterium, it is the interpretation.

I cannot help wondering whether their criticism is directed to both the Holy See and specifically to the person of the Pope, or at least to the post-Concilliar Popes. Is the SSPX really claiming that the last four Popes, and the Curia, have acted in a spirit of rupture towards the Magisterium?

Obviously examples might be seen in some of the strange actions of the Blessed John Paul; for example, being exorcised by a pagan priestess in Penitential rite, or praying with pagans, or venerating the Koran. Popes tolerating dissenting bishops, and even appointing known dissident priests to the Episcopacy is another example, so too bishops allowing publicly dissenting politicians to communicate and remain in good standing with the Church. As far as collegiality is concerned, the SSPX has criticised the rise in national Churches, with a localised theology, at the expense of unity with the Universal Church.

The problem is that reconciliation of the SSPX, and satisfying their demands will result in a narrowing and tighter definition of what it means to be Catholic. Benedict XVI has spoken a great deal about the hermeneutic of continuity but is he willing to following the logical follow on from this understanding of Vatican II, the pastoral demands of this policy, by a crackdown on dissent? His has always been a policy of "both, and" rather than "either, or", of wanting to include and win by arguement rather than dictat.
at April 13, 2012

Fr Ray - your last paragraph confuses me. I am wondering why 'a narrowing and tighter definition of what it means to be Catholic' should be 'a problem.' Isn't today's problem about people who insist they are Catholic but who see nothing wrong in using contraception, who agree that abortion should be allowed in certain circumstances, who do not attend Mass regularly etc etc.

Sunday's decision will be momentous for many though I don't expect to see anything in the secular press.

Which previous megisterial teachings in particular does V2 contradict?

Pelerin,
I have had added a last sentence, which clarifies, I hope.

Both Pope Paul VI and Blessed John Paul II spoke of the contradiction of Archbishop Lefebvre's position. And both Popes cited VATICAN ONE in condemning him. This is a point that is rarely made. Vatican One taught that Catholics - lay and religious - must submit to the authority of Pope even in matters appertaining to the discipline of the Church. The SSPX says we cannot submit because of doctrinal difficulties. Rome says that submission to the Pope is itself a doctrine and we have a circular argument. In the final analysis, it boils down to this: Where Peter is, there is the Church. Yes, life aboard the Barque of Peter is not always plain sailing, but it's the only vessel to be given the promise of divine assistance.

Have you ever visited www.sspx.org to read the reasons for their objections?

The site has a ton of information related to Catholic Tradition.

So what does a traditional Catholic do with this part of what you mentioned?:

"Obviously examples might be seen in some of the strange actions of the Blessed John Paul; for example, being exorcised by a pagan priestess in Penitential rite, or praying with pagans, or venerating the Koran. Popes tolerating dissenting bishops, and even appointing known dissident priests to the Episcopacy is another example, so too bishops allowing publicly dissenting politicians to communicate and remain in good standing with the Church. As far as collegiality is concerned, the SSPX has criticised the rise in national Churches, with a localised theology, at the expense of unity with the Universal Church."

I too believe that the documents of Vatican II can only be understood in light of tradition in the "hermeneutic of continuity".

I think the biggest danger has been mentioned by Bishop Fellay himself in his Chrism Mass homily:

"We grow the habits, precisely, of independence. We do not notice it anymore. We wish to do what we want. These are defects, bad habits, that are the result of the situation in which we find ourselves and to which attention must be paid."

Father, I was talking to the priest Fr Lloyd who was explaining that his church has not accepted vatican II but is accepted by the Vatican as part of the catholic church, so why not the sspx? Is this not something the same?

I don't see why a narrowing of what it means to be Catholic to a definition of 'holds everything that the Church teaches to be revealed by God' is such a bad thing, seeing as this *is* the definition of being a Catholic, and the flabbier understanding that has been in force in recent decades is *false*.

That might reduce the size of the Church, which contrary to what a lot of people say, is *not* a good thing (who wants a purified remnant when you can have a purified whole?). But nonetheless the Church does not grow when she is not teaching the Faith.

I think the best criticism of the modern Magisterium arose from the argument taking place on Sandro Magister's site (www.chiesa): the Magisterium simply refuses to teach or clarify the Church's positions sufficiently. No one really knows what Catholics think on a number of central issues.

Anyone who studies theology and Church doctrine will come to find some glaring contradictions between the tone and direction of Church teachings on things like ecumenicism, religious liberty, salvation outside the Church, the modern state, the death penalty, teh Old Covenant, etc. before and after VII. But only the current Pope has really acknowledged that these contradiction exist, even apparently. JPII seemed content to act as if the problem was simply a failure to evolve. The result has been that loyal contemporary "orthodox" Catholics have digested all of these changes in terms of development of doctrine, levels of authority, "small t" vs. "Big T" traditions, etc.. They act as if referencing those categories magically solves all problems as a matter of law or faith. However, a contradiction is a contradiction. A doctrine can't develop to contradict itself, and if current Papal teaching can always trump past teaching through clever hermenitical devices, why accept anything? Why should we not assume all current teaching will suffer the same fate and be reinterpreted, re-contextualized, or rebalanced?

Fr Lloyd? Is that the man who runs an "Old Catholic" chapel in Brighton?
I think what he claims might be more than what is.

He is certainly not a priest in communion with the Catholic church.
I think according to VII's understanding of Holy Orders, he probably isn't anymore a more a priest than an Anglican clergyman, or woman. Anglican Orders are rejected even if "Old Catholics" are involved in their ordinations.

As "Old Catholics" reject Vatican One they are "anathema", heretics, cut off from Mother Church, hardly comparable to with the SSPX.

Fr Ray, the article you linked to includes the following assertion by John Lamont:
The vast majority of theologians in Catholic institutions in Europe, North America, and Australasia would reject most or all of these teachings [from Vatican II]. These theologians are followed by the majority of religious orders and a substantial part of the bishops in these areas. It would be difficult, for example, to find a Jesuit teaching theology in any Jesuit institution who would accept a single one of them. "
If this is true (and I would suspect there is a significant element of hyperbole in Lamont's words) then I would suggest there are more important things to worry about than the SSPX. The teachings to which Lamont refers all seem fairly straightforward and uncontroversial.

I think the gentleman, styled The Right Rev. Canon, Monsignor Jerome Lloyd likes to pass himself off as a Catholic priest. He is nothing of the sort, but certainly manages to fool the local paper. Try googling Fr. Jerome Lloyd + Brighton and all will become clear.

It might be helpful to distinguish between pukka Old Catholics (of the Union of Utrecht) and those who may call themselves Old Catholics but are in fact episcopi vagantes or people who derive their orders and sacraments from them. There are no Old Catholic parishes in this country because the churches of the Utrecht Union (mostly in Holland, Germany and Switzerland) are in communion with the CofE, and visiting Old Catholics may communicate at Anglican altars (I will leave aside your observation on the subject of Anglican orders). Any ecclesiastical body in this country describing itself as Old Catholic is almost certainly sailing under false colours, as are bodies claiming to be semi-detached portions of the Roman Church. As well as the one represented in Brighton there is another calling itself the Society of St Leo XIII or something similar; it is completely bogus.

Dear Father Blake
Towards the end of Lent Bishop Fellay requested the faithful to ‘redouble’ their sacrifices and prayers “That the Divine Will may be done, and it alone.”
I firmly believe that the Will of God the Holy Ghost will indeed be known in due course.

I've seen that Jerome Lloyd bloke swanning around Clifton/Montpelier in his admittedly lovely robes and always assumed he was part of St Michaels up the road; what is his group/church exactly then?