Dancing or Drilling are they the same. 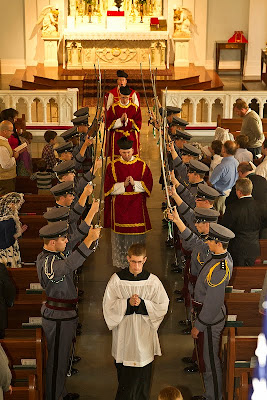 I think it is one of my parishioners who asks a question on NLM about a group of lads at an American military school who are performing ceremonial drill during a Traditional Mass for "Veteran's Day" ( I presume it was on a martyr's feast hence the red vestments). The question is: what is the difference between this and liturgical dance?
I am no fan of such dancing, prancing around during Mass seems be an unnecessary distraction but then so does drawing swords, dipping or not dipping flags, clicking heals and making command signals. Presumably even liturgical dance can be reverent, happen outside of the sanctuary, and maybe say something quite profound.
In the Ordinary Form, for funerals there is an explicit instruction that flags (even national flags) and secular symbols are not displayed  during funerals, presumably this does not apply to the Extraordinary Form or the US. I understand in fact they should be removed before the body is brought into Church.
On Armistice Day I say a Requiem Mass, I must admit I am never quite sure which Requiem texts to choose, they all talk about the "faithful departed", so presumably exclude from our prayers card carrying atheists, like one of my great uncles, whpo was definitely unfaithful, as well as Jews and Muslims.
This year I had an email from someone complaining that we didn't introduce a minutes silence to remember the dead "with the nation". Apart from it being impossible to organise Mass to come to a halt at the 11th of the 11th, I replied that this would be an unapproved addition to the Mass which was not allowed and besides we Catholics believed our prayers for the dead, especially the prayer of the Mass, was  much more effective for the dead than the Protestant Anglican custom of merely "remembering" them.
at November 19, 2012

Looks wrong to me. Swords should be left outside the church. The lobby in Scandinavian churches is called "Weaponhouse" because that is where people were meant to leave their weapons.

That said, this was presumably after the Ite Missa Est and technically speaking not during Mass. However, a guard of honour outside the church would have been more seemly.

It was a Votive Mass of the Holy Spirit, thus the red vestments.

The use of swords by an honor guard has long-standing application here in the US both in military institutions and through the Knights of Columbus.

This has nothing in common with "liturgical dance". It is not a liturgical aberration.

My dear Father, you probably know by now that your text appears as a single vertical line down the left margin of the frame. Anyway, the local Knighs of Columbus present this guard of honor at OF Masses said by the bishop here, and everyone processes out under it from the altar. The custom here is also for the Knights to kneel at the front of the church with the rest of the congregation after the Sanctus, then raise their swords in unison with heads bowed at the Elevations. So to my taste it's exactly like liturgical dance in that the Monty Python vibe is inescapable, God help me.

I've read that in the good old days papal troops would bang their halberds on the floor in St Peter's at the Elevation. This and the dipping of flags by the scouts at the Chartres Pilgrimage is perhaps more to do with lay participation than an addition to the ceremonies of the clergy.

However I confess when I saw a group of Knights of Columbas getting their swords out at the consecration in Denton, Nebraska (at an ordination) I thought it was a bit over the top. Maybe I'm too English.

NB flags in the sanctuary seems to be very common in the USA, I don't think it is exclusively an EF thing.

FYI, the US flag is never dipped. For anything.

On inspection of the pictures at NLM, the flags are at the back of the church fixed on the wall just beneath the choir and above the main entrance.

For me the only annoying part would have been obstruction in the middle of Mass -- TLM is hard enough to see as it is without a line up of high school kids with swords arrayed blocking the view of the sanctuary. But that's me. Given EF mass goers in general seem to be of the "it's not important that I see much of squat" variety, it probably doesn't bother most of them.

I expect "signals" could be given visually, or at worst no more than the finger snap an MC would give.

Someone (I think it was Paul Johnson) recalled that at Stonyhurst in the 1940s members of what was then called the OTC presented arms at the Elevation. I don't know if they had bayonets fixed.

Sometimes I assist at Mass (TLM of course) at a church in France where Girl Guides and Boy “Scoots” are present. It is for me a moving moment when the flags/standards are dipped reverently at the Consecration, man acknowledging the Almighty.