The brave Scottish bishops had two contenders for that accolade of accolades the homofacist Stonewall's award of "Bigot of the Year", one even won it, whereas no English cleric was epven up for an award, I suppose we all thought it was part of a war we couldn't win. 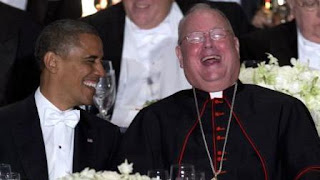 But apart from a giggle at the Waldorf Astoria with the source of the infringement of religious liberty, which might well have convinced a few Yanks that it was alright to let the chad hang for Obama, all that about a picture and a thousand words, their Lordships across the water do appear to take their liberty seriously, they even have a new website about it. Though there is nothing about Syria, Egypt, Iraq or even America's close friends and allies like Pakistan, Israel, Saudi Arabia, Britain


Religious freedom is our first American freedom. It is a founding principle of our country, protected by the First Amendment in the Bill of Rights. It’s a fundamental human right, rooted in the dignity of every human person—people of any faith or no faith at all. It’s not a Catholic, Jewish, Orthodox, Mormon or Muslim issue—it’s an American issue, a civil rights issue.

I can't wait for "Pablo the Mexican" to weigh in on this. I've long been at a loss to explain how so many Catholics could vote for anti-life people. Had our churches DONE THEIR JOBS and not been so concerned about getting citizenship for illegal aliens who became citizens and voted anti-life but *EDUCATED* these people about the faith -- they might not have voted pro-death.

Two days ago I was really disgusted about a piece one of the news outlets ran. "Jose" or whatever his name was had come as an illegal in '95 - his employer helped him become a citizen. A year or so ago he lost his job due to the rotten economy - but he had welding skills so built an oven and has now opened a small bakery in Colorado. He voted for the 1st time -- for abortion lover Obama. Because "Romney doesn't like people like me." -- Well, neither do I, Jose. Thanks for illegally gaining entrance, and then not even have the grace to vote against the biggest abortion lover the country has ever seen. Please do not be surprised when you are forced to carry insurance which pays for abortions, sterilizations, Birth Control -- you won't have the option to opt out, and if you don't pay for that, you'll be faced with a 2000k fine for each employee. Have fun when built in taxes start kicking in next year, Obama's making war on your new business too.

Ball's in your court "Pablo the Mexican" -- explain why "your people" seem so anti-life.

As for the non-hispanic "Catholics"? If the bishops had backbones they'd have stopped kissing and abetting the abortion lovers -- made sure every parish has pro-life groups instead of "yoga" groups, and maybe turned away people like Biden, Pelosi et al. from trotting up for Communion. They all pushed the "seamless" junk, until, of course, it's 'too late' and now SharkBama can't wait to close Catholic hospitals and institutions, or force them to throw away their belief in Catholic teaching and bend to HIS pro-abortion ways. You bishops put the noose around OUR necks. It's a failure that a single Catholic voted for Obama.

Is that the same Pakistan Obama has been using drone strikes on, killing innocent civilians in the process?

This Friday evening is an appropriate time to remember that great infringement of religious liberty, the "Crystal Night", when that brave but rather isolated priest the Provost of Berlin defied the Nazis with the words "Outside the synagogue burns, that too is a house of God". Lack of religious liberty can indeed lead to dire consequences.

Looks to me like somebody should have a Splenectomy.

Haven't seem so much rubbish on the screen since 2008

Gem you must God every day that were not born poor and Hispanic.

Am: I must "what?" God everyday? You missed the operative word in your sentence? Since when did being 'poor' become an excuse for not knowing the faith? My mother was the child of immigrants during the depression. Trust me, they knew the faith. They knew Killing babies was just not on, no matter how poor you were. 7 children, and my grandparents were not haunting Margaret Sanger's clinics for birth control "help." Their kids were sent to catechism class after regular school to study under the priest. But the priests in some immigrant communities today? You have to wonder. At my old parish I knew two "Hispanics" that were both EMs and one was also a lector. The male had the delusional idea that women could be 'deacons' and the female wondered why we couldn't use paper cups 'like the protestants.' The guy was in his mid 40s and the woman was nearing 60. Real good job the "hispanic" community did with them. So it's not just the young ones who are ignorant.


In these days of legal abortion, there is literally no excuse about being lazy to find out what the candidate has done. Obama has been nothing but 100% pro-death. He voted, while in the Illinois state legislature to permit babies who'd survived an an induced abortion to be left to die alone in a hospital utility closet with no medical attention. Even pro-aborts were running from that one. But that was one of the few issues he bothered with -- most of the time he voted "present." Just like he did in the US senate. A nothing man who is destroying and will continue to destroy America -- but not without the help, assistance and support of too many "catholics" who should know better, or at least have the decency to admit they are no longer Catholic.

Planned Parenthood must have been breaking out the champagne.

As for Catholics voting for Obama, it's a bit like turkeys voting for thanksgiving (or Christmas).

"I've long been at a loss to explain how so many Catholics could vote for anti-life people" - Me too; but then the new 'holey' is 'liberalism - the you're ok if i 'think' i'm ok judas-syndrome' We've been schooled to be so egregiously 'accepting' that no matter what, if the 'i' still looks good on the social don't rock the boat, it's all good 'cause it's sinking, meter then the 'you' can be/do...whatever.

Also, pparently alot of voters were too busy with the aftermath of 'Sandy' and the new nor-easter rising to even think about voting.

My good father: Thank you for this marvelous blog. I would like to address your topic today, if I might.

I don't know why Brits don't get all fired up about religious liberty like we do here in the US. But perhaps it's because England was a Catholic place for nearly 1,000 years before Christianity became a branch of the state.

It was - and still is - a commonplace of the traditional Catholic mind that "Error has no rights." So perhaps talking about religious liberty in England, or in any country with a long Catholic history, is like talking to a Buddhist about God. It's not so much that the idea is false, but rather that it's incomprehensible.

The other thing is, England is a place. In England you can go look at stuff that's been in the Domesday Book for about 1,000 years. That won't happen here in the States until about the year 2600.

The US is not a place, not yet (and after last Tuesday, it might never be). The US is an idea, and the idea is best embodied in our Declaration of Independence and our Constitution.

The essence of this idea is that God gave people the rights to speak freely and to follow their conscience in worshipping Him freely. The idea of freedom of conscience is the essence of what the US is.

That's why last Tuesday was such a catastrophe. Ideas can be overthrown, and our President intends to overthrow the idea of freedom of conscience in the US. Which is to say he intends to destroy what the US is, the idea it is. And there is no doubt he will succeed to a greater or lesser extent.

It's why our Catholic bishops have a whole web page devoted to freedom of conscience, and why thoughtful American Catholics aren't just overreacting when they say the US died last Tuesday.

We Americans have had four years to see what our President is all about, and there's no doubt he won re-election fair and square anyway. Maybe the US really did die on November 6, 2012. If it did, it did so by its own hand.

As for our cheery Cardinal Dolan, one of his predecessors in New York was Archbishop John J. Hughes (1797-1864). Archbishop Hughes was also known as "Dagger John," and not for nothing. How will his latest successor be known and remembered? Perhaps as "Toastmaster Tim?"

A better question might be, which kind of bishop do we need now to help save not only our Church but also our beloved nation?