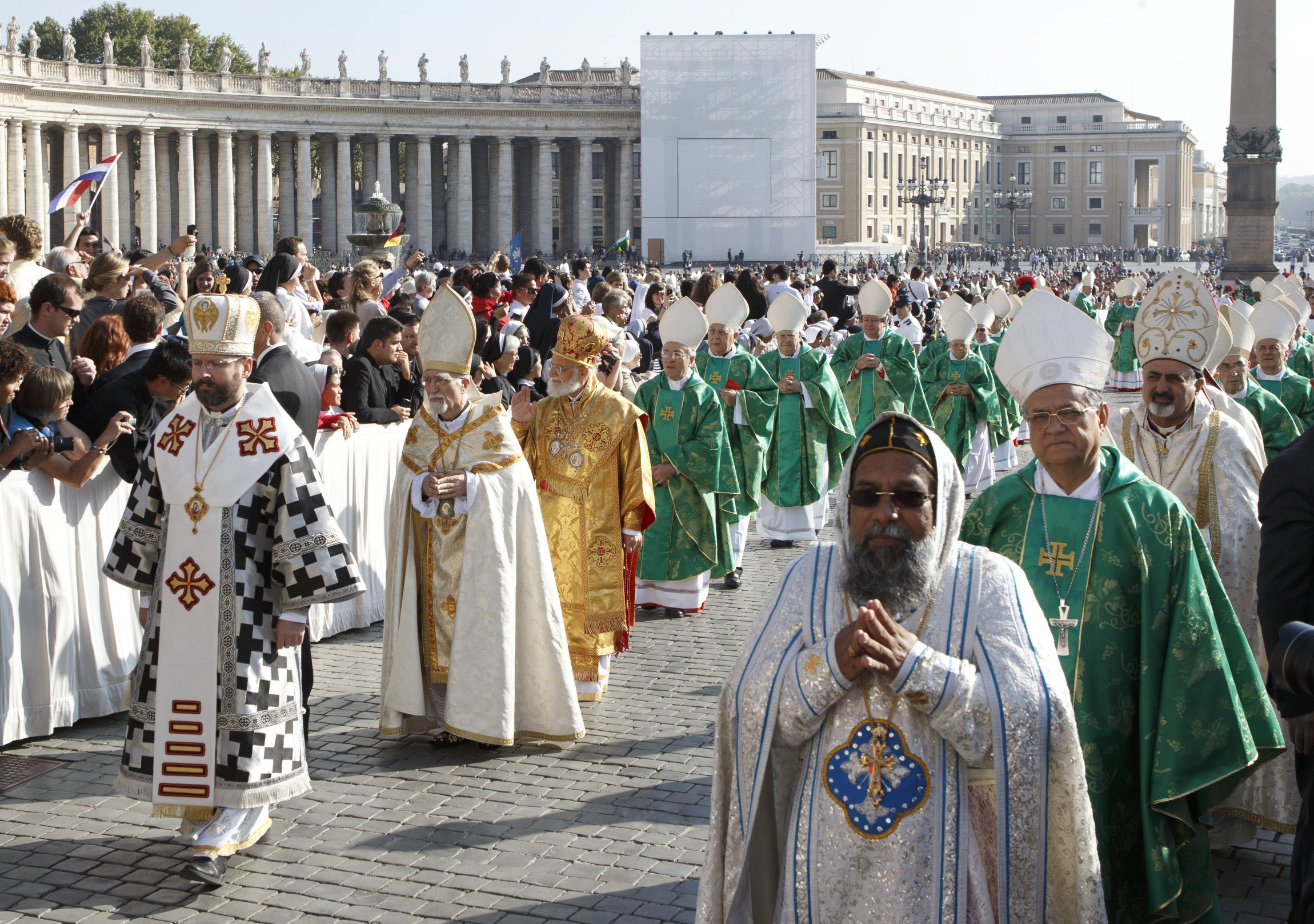 "Ministers enter, pursued by Priest", could describe the beginning of Mass. Normally in the UK the congregation are shuffling about in silence or have their noses in a hymnbook, in my parish many have not yet arrived.
What is supposed to happen, at Sunday Mass at least, is the people, with a deep hunger, that has built up over the whole week, eagerly come to Mass, and having assembled prayerfully reminding themselves of all their spiritual and temporal needs, of all the graces they have received during the week and for which they will give thanks at the Great Thanksgiving.

The people, the Body of Christ, still praying, make a transition from their private prayer to public prayer as they joined by the priest who represents Christ the head of his body the Church. There should be a frisson of joy and expectation as Head and Body are united to become truly the Body of Christ. Now at last they can bein the the Liturgy, meaning, the work of the people. The should do this in prayerful recollection.
In the Novus Ordo, the music that accompanies this entrance should enhance, not disturb or disrupt, the prayerful recollection of the congregation. The preferred the Church sets forth is the plainsong Introit, the music is a deliberate choice to illustrate the quotation from Sacred Scripture which sets the theme of the Mass.
The purpose of the Introit is to mark not only the assembling of the Church, the priest joining with the people people but also to highlight what is happening when the priest and ministers ascend to the altar, first worshipping the Blessed Sacrament by genuflecting, or venerating the crucifix, the image of Christ, then kissing and incensing the altar, the symbol of Christ himself and his sacrifice. This is supposed to be a momentous act that people participate in with deep and profound spiritual joy.
The trouble is "Ministers enter, pursued by Priest", and prayer is dirupted by a crass metrical hymn and the people don't even notice the mystery being expounded because they are not paying attention at all, they are reading a book!
at November 14, 2012

"Tell out my soul" is a common thing to kick off with. Horrible, and it sets the tone for the rest of the Mass.

"I always wanted
Waterford."
My mother said
I overheard.

She always wanted
Yes to ride
In limousines
O'er far and wide.

Instead she walked
Five houses down
To Holy Mass
With poor of town.

In darkened dawn
Of morn she'd go
Big with child
A pregnant glow.

Into the church
Of golden light
Where hands of priest
Bore God of might.

His dwelling place
Incensed and myrrhed...
But she always wanted
Waterford .

Are you suggesting that this another benefit of the Extraordinary Form? We wait silently, checking the pages in the missal and thinking our own silent thoughts. A bell rings. We stand. The priest enters, lead by a server, silently and purposefully. The priest genuflects, we kneel. We pause, not quite daring to enter the presence of the Almighty. The sign of the cross, introibo ad altare dei. We are as ready as we ever can be.

No, it is the start of the Ordinary Form. The EF; one would have wait for the prayers at the foot of the Altar before the Introit was sung.

God bless Fr. Ray and Long Skirts - Christly comfort on the swifter side to the dust; God allow that we have time enough to understand the 'long skirts' grist that brings the pearl before judge!

Longskirts -- well, Rose Kennedy managed to have both the pregnant belly and the Waterford and daily Mass. Fat lot of good it did for her pro-abort children like Teddy and scads of pro-abort grandchildren.

Nice poem -- but logically I don't think Waterford or being poor or rich have much to do with faith. One either has it or doesn't. Poverty or wealth don't really enter in to it.

"The poor" Hispanics in America managed to vote for the very pro-abort Obama by whopping greater than landslide margins. "Free stuff" apparently trumping right to life they supposedly believe in.

And yet the rich Buckley family managed to produce many good practicing Catholics, including a priest who is now in a cloistered order in France.

gemofthe ocean said : "fat lot of good it did her".

Rose Kennedy lived a good life, in spite of extremely provocative behaviour by her husband which tested her cathopliciosm and her patience enormously.

She was a very generous benefactress of charitable causes and did her best to keep her wayward family together.

In 1951, Pope Pius XII granted Kennedy the title of countess in recognition of her "exemplary motherhood and many charitable works."


It’s pity you don’t share his opinion, we cannot be blamed for our children’s behaviour, I’d say.

I agree with your position.

Many American Protestants write history with their opinion, which is always misinformed and uneducated in Truth.

Roman Protestants live in America and have traded the Treasury of Holy Mother Church's Truth for Protestant and Gnostic thinking.

It is like the Jews that backed the Scribes and Pharisees to the point they denied and even spat in the face of our Saviour.

They held positions at the Temple, and were not about to be Charitable to those poor souls most in need of God's mercy.

Today we have women Extraordinary Ministers, lectors, everything but consecrate hosts, and that's next.

In their lust for position in the Church, they have jettisoned Charity.

Mrs. Kennedy is not respected by women that ape men, or men that are feminine.

The few Traditional Catholics left in America always speak highly and pray much for Mrs. Kennedy and her children.

When Mrs. Kennedy's son became President, the poor no longer went hungry, Negroes stopped being hung from trees, and the opportunity for decent jobs opened up due to Executive Order from President Kennedy.

Even in rural areas of Mexico, you will see in homes a crucifix, a Sacred and Immaculate Heart, a picture of the Pope, as well one large one of President Kennedy.

Mighty prayers from poor humble Mexicans have been sent to Heaven on behalf of Mrs. Kennedy and her children.

We are not to pray for the damned, but we can certainly hope God's mercy was generous to Mrs. Kennedy's children and grandchldren.