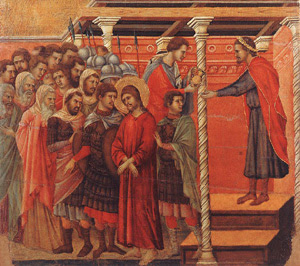 Two Kingdoms stand face to face, two rulers stand before one another.
Pilate is surrounded by his bodyguard, because he is dependant on them to preserve his life and to impose his will. He is dressed in a way that speaks of power, he lives in building that speaks of power, he is powerful he has power to take the life anyone he chooses, he has power to give great wealth or reduce someone to slavery. Yet he is a delegate of the Emperor, his power comes from his Imperial appointment and he remains in power providing he can subjugate the people over who he rules. Insurrection, another letter of complaint from the High Priest or a visitor to Rome, a change of Emperor, or just Imperial whim or even a few bad harvests or a natural disaster could remove him from office.

Before him stands "the King of the Jews". Pilate simply doesn't understand Him or his Kingdom. He is powerless, already he has been abused and spat upon; rejected by his own people. He stands in alien place, out side (lest they be defiled by entering the Praetorium) are priest and the mob beying for his blood. In a few short minutes Pilate will have him stripped and flogged, he will stand before Pilate less than human, dripping blood onto the floor in front of Pilate. The soldiers have overheard the conversation, they mock him clothe him with purple and crown him with thorns.

Two Kingdoms stand face to face, two rulers stand before one another.
Pilate's kingdom depends on earthly power, wealth, force of arms, oppression and suppression. Jesus the Alpha and the Omega depends on who he is the Son of God, God made Flesh. The world will divide, "I come to bring division", he has said. Pilate, the Emperor, the High Priests, the mob, because his kingdom ios based on a relationship with him. The world belongs to one Kingdom; the Crucified will gather another kingdom, "when I am lifted up", Mary, his Mother, the other women, John the Apostle, will assemble around Him, together with the whole court of Heaven, the Apostle too will re-gather. They will go through out the world calling all mankind to gather with Christ, to come into His Kingdom. Most will choose the Kingdom of this World; like Pilate they find the Kingdom of Heaven absurd, or simply incomprehensible, because it is Faith, his Fathers gift which draws us to Christ.

This feast is not old, established in 1925, at the dawn of the age of dictators. In Mexico there was a rebellion, the Masonic secularist government had all but outlawed Christianity, the rebels battle cry, the name on the lips of so many hundreds of martyrs, was "Cristo Rey", Christ the King.

Two Kingdoms stand face to face, two rulers stand before one another.
This is what has happened with Christians since the encounter between Christ and Pilate and will happen until  the end of time. The powerless, the rejected, the powers of Heaven forever crushed by the powerful, the status quo, the powers of Hell; governments and governors have always wanted the Church to be subservient, to accept, to promote its agenda, sometimes it has but at its best, when it relies solely on Christ then it is crushed, bruised, derided in a diabolic attempt to destroy it.

Father, It is Saint Thomas More, unless you are referring to an Irish song writing poet.

job,
I think you'll find he used both spelling: "More" when he wanted a more Latinate form, and "Moore" the more common Anglinate form. I prefer, and deliberately choose, the English form.

God Bless, Father - it really is that simple:

"... have seen it with Sts Thomas Becket, Thomas Moore, during the English Reformation; Henry VIII destroyed the Church of Christ poring out the blood of His Saints before the altar of a God made the King's image"

At least things were more clear-cut...

One day Assisi
The next day Latin
One day The Way
Some use a paten.

Some let ministers
Eucharistic-chick
Hand out Our Lord
So you can have your pick.

One Holy Catholic
Apostolic Church?
Good for some let others run
In circles as they search.

For we are all approved
Don’t ever rock the boat –
Like those who open schools have classes
Teaching souls to float.

Saintly Thomas More
Could’ve had it all
Private Latin Masses
Behind a purpled wall.

But no – he chose the scaffold
Where truth and lie collide