The Holy Father, everyone knows, wants to correct the errors that were widely taken up after the Second Vatican Council, the silly nonsense that was termed "the Spirit of Vatican II". The rather Protestant understanding that the church had no sacred history, as if the Holy Spirit had not been guiding it "into all Truth" over the last 2,000 years and as if somehow there had been no other Council in all those years.

Central to Benedict xvi's understanding of the vision of the Church is the Sacred Liturgy, the big question is: Is the liturgy about man or is is about God? I put it crudely: Is it about entertaining us or is it about worshipping the Divine? The same question can be asked about the Church, again crudely: Is the Church for us or is it for God? We can extend this question even further to Man himself: Is our purpose to serve ourselves or to serve God? 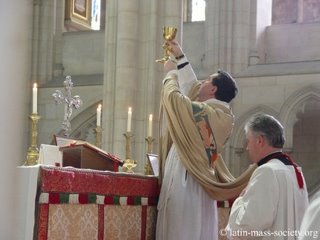 It is interesting that in the next few months the Holy Father is to issue a response to the Fathers of the Synod on the Eucharist, held last year, in which they, the bishops, asked for a deeper sense of reverence in the Mass. He is also working on reconcilliation of the renegade Lefebvrists who broke away for the Church in the 80s. He has stated that in Papal liturgies there will be greater solemnity. It is interesting that Archbishop Arinze, Prefect of the Congregation for Divine Worship has been making increasing demands for liturgical reverence that go beyond mere rubrical or liturgical directives. The first public appearance of his newly appointed No 2, Archbishop Ranjith, was to endorse the Italian version of Uwe Michael Lang's book "Turning Towards the Lord" which was prefaced by Card Ratzinger. In it Fr Lang of the London Oratory argues for the priest to face the same direction as the people at Mass, this is an amplification of the Pope's own book "Spirit of the Liturgy".


Domenico Bartolucci, former Director of the Sistine Chapel Choir, in this interview speaks frankly about the nature of music in worship. Remember the Roman Missal still speaks of Gregorian Chant and Polyphany (as in Palestrina) as being normative. It is music after all that creates in the broadest possible sense "the sound of the Liturgy".
http://wdtprs.com/blog/
at July 21, 2006

Thank you for putting such important questions so clearly before us

Can't we have more Catholic music, do we really need tedious Victorian hymns and can't we have something other Mass viii, like Lux Origo and what about the Creed

"Spirit" or "poltergeist" of VII?

What we have barely conveys the meaning of what we celebrate. I like the theory of the Old Mass, really because it is contemplative, in prasctice I find it boring. The Novus Ordo just seems so unprayerful

,oops, it is also boring. Young people are right when they describe it a s such, it lacks "prayerfullness. I think the Popes's book "Spirit of the Liturgy" suggests a way forward.

SMM Novus Ordo Mass does not lack prayerfullness, but the music could be improved. People are not singing a lot of the English hymns, they might not know the tunes. But they are certainly singing up for the Latin parts of the Mass, so perhaps we should have the responses, Creed and Pater Noster in Latin as well, though the congregation needs to be prepared for it and printed sheets put out. The first Sunday in Advent might be a good date to aim for.