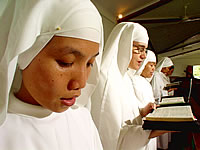 Vatican City (AsiaNews) – The day for those who pray, which is celebrated on 21 November, the commemoration of the Presentation of Mary in the Temple, is traditionally dedicated to remembering cloistered religious communities. The value of this day and of cloistered life itself were at the heart of the reflection of Benedict XVI before today’s Angelus, delivered to tens of thousands of faithful gathered in St Peter’s square.
This day is an “opportunity, as timely as ever, to thank the Lord for the gift of so many people who, in monasteries and hermitages, dedicate themselves totally to God in prayer, silence and seclusion.” The pontiff appealed that “our spiritual and even material support” to such cloistered communities, male and female, will not fall short, “so that they may fulfill their mission of keeping alive in the Church the ardent expectation of the return of Christ.”
The pope said that in our time, “there are not a few people who leave their professional, often promising careers, often to the surprise of friends and acquaintances, to embrace the austere, regulated life of a cloistered monastery.”
Benedict XVI cited many objections that abound in society about such vocations: “Some ask what meaning and value their presence could have in our time, when there are numerous and urgent situations of poverty that need to be tackled.” Why “close yourself” forever within the walls of a monastery and thus deprive others of the contribution of your capabilities and experience? What effectiveness could your prayers have for the solution of so many problems that continue to afflict humanity?”
The pope showed that behind apparent futility, there lay a great, effective witness for believers and non believers. Above all, people who embrace the cloistered life have understood that the “Kingdom of the heavens is a ‘treasure’ which it is well worth giving up everything for (cfr Mt 13:44)? In effect, these brothers and sisters of ours testify silently that in the midst of daily life, at times rather tortuous, the only support that never vacillates is God, the unshakeable rock of faithfulness and of love. “Todo se pasa, Dios no se muda”, wrote the great spiritual teacher, St Teresa d’Avila, in a renowned text.”
In the second place, cloistered monasteries “apparently futile, are really indispensable, like the green ‘lungs’ of a city: they do good to all, even those who do not visit them and who perhaps ignore their existence.” And this is why there is the “widespread need” to “leave the daily routine of large urban cities in search of propitious places of silence and meditation, of monasteries of contemplative life that are like an ‘oasis’ in which man, pilgrim on earth, can better draw from the source of the Spirit and quench himself along the way.”
The pope concluded his reflection by reiterating “thanks to the Lord, who is his providence, brought about cloistered communities, male and female”, asking for them and for all, “the intercession of Mary who, in commemorating her Presentation in the Temple, we will contemplate as Mother and model of the Church, who unites in her both vocations: to virginity and to matrimony, to contemplative as well as to active life.”
Posted by Fr Ray Blake

Splendid blog, Father. I have taken the liberty of linking Vultus Christi, my blog, to yours.

Those are some nice looking nuns.

I'd like to collect them. Do you know where the pic comes from?