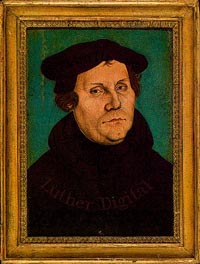 I found this piece about Luther here, I can't help but place most modern ills at his feet, what Manuel ii said about Mohamed could equally be said of Luther.


On this day 1517, Martin Luther nails his 95 theses on the doors of the Castle Church in Wittenburg. They would spark a theological debate that would eventually rend Western Christendom asunder.


Having sparked a revolution, Luther noted; one "cannot meet a rebel with reason: your best answer is to punch him in the face until he has a bloody nose" (Paul Johnson, "A History of Christianity", page 283).


The peasants' ears "must be unbuttoned with bullets, till their heads jump off their shoulders... he who will not hear God's Word when it is spoken with kindness must listen to the headsman when he comes with an axe." (Will Durant, "The Reformation: A History of European Civilisation from Wycliffe to Calvin: 1300-1546", page 393).


"It is God, not man, Who hangs, and breaks on the wheel, and decapitates, and flogs; it is God who wages war."
"The world cannot be ruled by a rosary" (page 448)

Luther also recommended that the Pope, cardinals and others in the Papal curia "have their tongues torn out by the backs of their necks, and nailed in rows on the gallows" (page 450).


Eventually, Luther considered all other Protestant sects "tools of the devil", and as he died, he believed that the whole world was going to the devil because of the Catholics, the Jews, other Protestants, and the rising tide of irreligion in his own Germany.


It is hard to believe that this lunatic is almost singlehandedly responsible for the 45,000 Protestant sects around today.
at November 01, 2006

Email ThisBlogThis!Share to TwitterShare to FacebookShare to Pinterest
Labels: protestantism

This just goes to show that the Reformation was not about Protestants advocating religious liberty against Catholics who opposed it.

Both were in favour of putting people to death for heresy - only in most Protestant countries this was prosecuted as a head of treason.

I do not think the Church was ever "in favour of putting" anyone, "to death" and certainly not for heresy. Do you have any facts to support your view?

The Catholic Church always wanted to save people from heresy, both the heretic but also those who might she/he might be infected by this contagion in the future.

450,000 Protestant sects shouldn't surprise you. Luther was the arch-divider.
"Divider" the older form of the word is devil.

Servum Petri - In mediaeval Europe the unity - and therefore the peace of civil society - depended as much on confessional unity as it depends today in this country on the stability of the Throne. This is why high treason has always been considered as a most serious offence.

So it is unsurprising that obstinate and persistent heresy was then branded a capital offence in most countries.

It is well known that religious freedom as we knew it in the 19th century, let alone today, would have been unthinkable to the mediaeval mind.

Luther, on his death bed, also said 'perhaps it's all been a big mistake'.

If Luther had lived to see the Hundred Years' Bloodbath (in which one third of Germany's population perished) he wouldn't have been so reticent!

Michael,
You still haven't furnished any evidence for your statement, that the Catholic Church was in favour of putting people to death for heresy.
I think that this is the type of idea one excpects from anti-Catholic protestant ministers, such as the one you referred to in an earlier comment, or even Foxe's Book of Martyrs but supply hard and fast evidence.

It wasn't so much the Church, as the civil power (the secular arm) that put people to death for heresy. In this country we had the statute De Haeretico Comburendo which you will find on the Internet at http://www.ric.edu/rpotter/heretico.html

The reformation, as the quotations show us marked a significant alienation of the poor from ecclesiastical authority. The Catholic Church loved them, Protestantism hated them.

Luther said somewhere, before the Reformation there was Pope in Rome, now in Germany seven of them sit every dung hill, each giving his own pronouncements.

Luther, was also responsible for the rise in anti-Semiticism in Germany which found its fruition in the 20th century.

I quite agree, Anonymous. But it goes deeper than that.

Anti-Semitism among Christians had by Luther's day had a long pedigree, and manifested itself in the assumption that God had rejected the Jews for their unbelief in Christ, and replaced them with the Church.

The Protestant narrative merely transferred this assumption to the Church: Rome had betrayed Christ by her own unbelief, and had now been cast aside and replaced by national Protestant churches, each patronised by a godly Prince.

This in a context which lent itself to the idea that the Prince's realm might as well be considered God's new chosen people in replacement of Israel.

The Holy Father's act of repentance for the anti-Semitism of Christians, at the Western Wall in Jerusalem in 2000, has arguably set a time bomb beneath both Islam and every movement of separation from Rome. Neither can survive the refutation of Supersessionism.

Michael,
Luther wanted to herd Jews who did not convert into camps where they could be left to starve.

"Godly" princes for the most were very much lacking in 16th century.

I quite agree, anonymous. You were right to put the word "godly" in quotation marks. After all I was setting the Protestant narrative in the context of Supersessionism -I wasn't trying to make it my own!