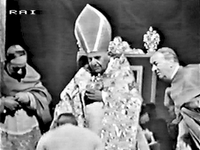 Father Sean has some splendid pictures from a video of the Coronation of Pope John XXIII. I am glad he put them on his site at this time of year because it reminds of a singular act of kindnes on his part.
Nine years ago a great friend of ours Fr Michael Sewell died whilst on holiday with me in Istambul on 19th November, 1997 . Fr Sean collected me from the airport we went back to his place, I really didn't want to talk or watch a secular video or anything and so he suggest that I might enjoy watching this extra-ordinary video of the Coronation, with some very good cognac and hot chocolate. Today is the anniversary of my first seeing it.
I have had a devotion to the Blessed Pope ever since.
Say a prayer for Michael, and his mother who died a few months after him.
at November 22, 2006

Dear Fr Ray,
Michael is in my mind, too, these days. Sunday was his anniversary, of course. Glad you like the pics. More to follow.