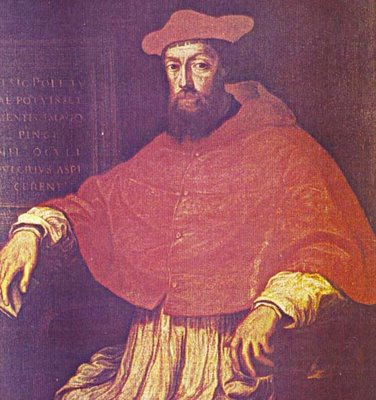 Reginald Pole was the son of Sir Richard Pole and Princess Margaret, Countess of Sailsbury, niece of both Edward IV and Richard III. He was born in Staffordshire in 1500 and educated at the school of the Charterhouse of Sheen and the house of the Carmelite Friars in Oxford. He matriculated it Magdalen College and became Dean of Wimborne Minster and, afterwards, Dean of Exeter. He studied in Italy and France and, as he was known to be opposed to the King's divorce and to his anti-papal policy, he deemed it wiser to remain abroad. In 1536, he was summoned to Rome by Pope Paul III, who insisted that he should take Deacon's Orders and be made a Cardinal. In the following year, he was appointed Legate. He was present at the opening of the Council of Trent and he was employed by the Pope in missions to the King of France and other princes with the view of forcibly restoring the Papal authority in England. Failure attended his efforts. His mother was brought to the block and his own attainder soon followed.
The accession of Queen Mary, in 1553, changed the aspect of affairs however. Pole returned to England and became Primate in 1556. But his long services to the Papacy were not destined to be crowned with any lasting success. His friend, Paul III, had died in 1549 and Paul IV regarded him with dislike and suspicion. Having plunged into a war with Spain, he withdrew his Legates from all parts of Philip's dominions and, though Pole was desirous of remaining neutral, he found himself suspected of heresy and deprived of his legatine office at a time when he had special need of the authority which it conferred upon him. In consequence of his remonstrance, the Pope appears to have eventually yielded so far as to allow him to retain his position as legate.
Pole was spared the mortification of witnessing the final overthrow of the Papal domination in England, which followed the death of Queen Mary, for he survived the Queen but a few hours, dying of double quartan ague on 17th November 1558.
at November 17, 2006

Email ThisBlogThis!Share to TwitterShare to FacebookShare to Pinterest
Labels: Saints and Heroes

one of the underated heroes of that ghastly period in history, never mind canonising Newman, this was a man who bore witness to the true faith in times of great difficulty.