Pope at "Ministry" of Religion 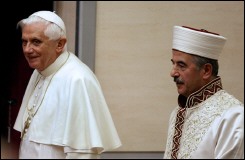 ANKARA, Turkey: Guarantees of religious freedom are essential for a just society, Pope Benedict XVI said Tuesday following meetings with the Islamic cleric who oversees Turkey's religious affairs.
The comments by the pontiff could be reinforced later during the four-day visit when the pope meets in Istanbul with Ecumenical Patriarch Bartholomew I, the spiritual leader of the world's Orthodox Christians.
The pope is expected to call for greater rights and protections for Christian minorities in the Muslim world, including the tiny Greek Orthodox community in Turkey.
"Freedom of religion, institutionally guaranteed and effectively respected in practice, both for individuals and communities, constitutes for all believers the necessary condition for their loyal contribution to the building up of society," the pope said following talks with Ali Bardakoglu.

Benedict has made religious freedom one of the centerpieces of his papacy, and has complained about countries denying full rights to Christians.

Ali Bardakoglu, secular Turkey's top religious official, who had slammed the pontiff for his remarks on Islam in September.
The Pope quoted 11th-century Pope Gregory VII after a north African Muslim prince "acted with great benevolence towards the Christians under his jurisdiction."
"Pope Gregory spoke of the particular charity that Christians and Muslims owe to one another 'because we believe in one God, albeit in a different manner, and because we praise him and worship him every day as the creator and ruler of the world'," he said.
But Bardakoglu, who had had harsh words for the pontiff's remarks in September, showed in his speech that Benedict's words were not completely forgotten.
"Islamophobia," he said, "is gradually increasing."
He blamed this on a "mentality that Islam, with its history and origins, contains and encourages violence, that it was spread... by the sword, that Muslims are potentially violent."
"Those who perform erroneous acts in the name of religion by exploiting religion" are at the source of such claims, Bardakoglu said.
"We religious leaders must refuse to be instruments of the tensions of international politics and should contribute to the solution of social problems," Bardakoglu said.
The two men were addressing reporters after a short closed-door meeting with their respective delegations, itself preceded by an off-the-cuff, 15-minute chat in front of television cameras during which they exchanged gifts.
"Religions are for peace and reconciliation -- they should not be interpreted otherwise," the pope said during the chat.
Bardakoglu, the director of religious affairs, had accused Benedict of harboring "hatred in his heart" for Muslims after the leader of the Roman Catholic Church appeared to link Islam with violence.
In an interview Monday, Bardakoglu said the pope's four-day visit to Turkey, although "a step in the right direction," would not suffice to heal the hurt his comments had caused.