Pope recalls Armenian genocide
Istanbul, Nov. 30, 2006 (CWNews.com) - Pope Benedict XVI (bio - news) brought up the sensitive topic of the Armenian genocide-- although he did not mention it explicitly-- during a November 30 meeting with the Armenian Apostolic Patriarch of Istanbul, Mesrob II.
In his greeting to the patriarch, the Holy Father praised the Armenian people for their faithful witness to the Gospel, even under "truly tragic conditions, like those experienced in the past century." He was clearly alluding to the slaughter of Armenians under the Ottoman empire.
To this day the Turkish government refuses to acknowledge the genocidal campaign of 1915- 1917, in which an estimated 1.5 million Armenians were killed during massacres and forced marches, as the government of the "Young Turks" forced the relocation of an entire people. The Armenian Apostolic Church remains the largest Christian community in Turkey, but today numbers only about 50,000 faithful; in the late 19th century the number was several million. There are about 2 million members of the Church living in the country now known as Armenia.
In his remarks to Patriarch Mesrob, the Pope expressed regret over the divisions among the Christian faithful, repeating what he had said to the Orthodox Patriarch Bartholomew: that these divisions are "a scandal to the world" and a handicap to effective evangelization.
The Armenian Apostolic Church dates back to the year 506, when the Christian leaders of the region broke away from the Catholic Church over disagreements with the doctrines put forth by the Council of Chalcedon in 451. Those theological disputes have been resolved, and in 1996 Pope John Paul II (bio - news) and the former head of the Armenian Church, Karekin I, jointly signed a document affirming that the two churches have reached accord on the Christological issues that originally caused their separation.
Pope Benedict joined with the Armenian patriarch in a prayer service at the Armenian cathedral in Istanbul. Later he would meet with the city's grand rabbi, then end the day at a dinner with the Catholic bishops of Turkey. 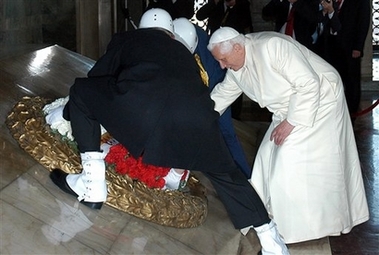 Before I found the above...
I was looking for something on the Pope's meeting with the Patriarch of the Armenians, I found this rather chilling piece on Rorate Caeli.

From some famous exchanges between Turkish Interior Minister, Mehmet Talaat Pasha (soon to be one of the last Ottoman Grand Viziers, Talaat was one of the leaders of the "Young Turks" and an architect of the Armenian Genocide), with American Ambassador in Constantinople, Henry Morgenthau, in 1915 (in "Ambassador Morgenthau's Story", by Henry Morgenthau):

"...I have asked you to come here", Talaat said, "so as to let you know that our Armenian policy is absolutely fixed and that nothing can change it. We will not have the Armenians anywhere in Anatolia. They can live in the desert, but nowhere else.


"I still attempted to persuade Talaat that the treatment of the Armenians was destroying Turkey in the eyes of the world, and that his country would never be able to recover from this infamy.


"You are making a terrible mistake," I said, and I repeated the statement three times.


...One day Talaat made what was perhaps the most astonishing request I had ever heard. The New York Life Insurance Company and the Equitable Life of New York had for years done considerable business among the Armenians. The extent to which this people insured their lives was merely another indication of their thrifty habits.


"I wish," Talaat now said, "that you would get the American life insurance companies to send us a complete list of their Armenian policy holders. They are practically all dead now and have left no heirs to collect the money. It of course all escheats to the State. The Government is the beneficiary now. Will you do so?"


This was almost too much, and I lost my temper."You will get no such list from me," I said, and I got up and left him.

The only thing that has rather saddened me about the Papal vist was the Holy Father laying a wreathe on the ugly tomb of Kemel Ataturk. He stands alongside Hitler and Stalin as one of the dictators of the 20th century, his writings are as frightening as anything in Mein Kampf.
I suppose the poor Pope would not have got in if didn't do it.
at November 30, 2006

Are you sure you've got your facts right about Ataturk being a mass murderer? The architect of the Armenian Genocide was Talaat Pasha, and he was an officer of the Imperial government.

You are right Michael I have amended the article. Thanks.

I am glad you have referred to the Armenian massacres. More needs to be known about them.