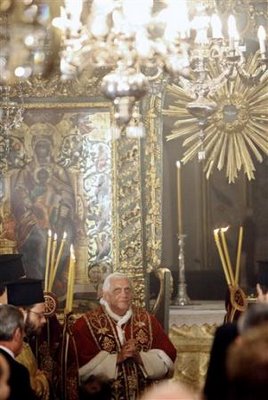 CNA
The pope expressed his great joy at the encounter and said he would treasure the Orthodox welcome forever.
"I thank the Lord for the grace of this encounter, so filled with authentic good will and ecclesial significance," he said.
"May this meeting strengthen our mutual affection and renew our common commitment to persevere on the journey leading to reconciliation and the peace of the churches," he said.
The evening prayer service in Istanbul Nov. 29 opened two days of richly symbolic events and brought an ecumenical focus to the pope's four-day visit to Turkey.
Patriarch Bartholomew, who is honored as the "first among equals" in the Orthodox world, greeted the pope at the Istanbul airport and met him again shortly afterward on the steps of the patriarchate's headquarters, where dozens of Orthodox prelates were waiting in the Church of St. George.
The pope and patriarch lit votive candles and, as applause rang out, walked up the center aisle, their path clouded with incense. A choir chanted antiphons commemorating Sts. Peter and Paul, the patron saints of Rome, and St. Andrew, the patron of the patriarchal see of Constantinople, the ancient name of Istanbul.
The pope, wearing a red cape against the chill, looked good after a day that took him from the capital city of Ankara to the ancient site of Ephesus for a Mass, and finally to Istanbul.
The pope and patriarch listened to a reading of the prophet Zechariah, calling the peoples of East and West to assemble again in Jerusalem. After praying the Our Father, they each gave short talks.
The pope spoke of the ancient Christian roots of the region and cited "the rich harvest of martyrs, theologians, pastors, monastics, and holy men and women which those churches brought forth over the centuries."He also recalled the ecumenical milestones of recent years, including the decision of both churches in 1965 to lift the excommunications exchanged in 1054 which marked the beginning of the East-West schism.At that time, the pope said, Pope Paul VI and Patriarch Athenagoras announced their ecumenical breakthrough in a "spirit of rediscovered love."
"It is on this foundation of mutual love that new relations between the churches of Rome and Constantinople have developed," he said. The signs of that love, he said, include visits of Popes Paul and John Paul II, in 1967 and 1979, respectively, to the ecumenical patriarchate.Patriarch Bartholomew also recalled the visits of previous popes, saying these men understood the "inestimable value and urgent need" of such encounters.
"We are deeply grateful to God that Your Holiness has taken similar steps today in the same spirit," the patriarch said.The pope and patriarch stopped briefly to venerate the relics of St. Gregory Nazianzen and St. John Chrysostom, both former patriarchs of Constantinople. Pope John Paul returned a portion of the relics to Patriarch Bartholomew in 2004; they were believed stolen from Constantinople during the Crusades in 1204.
Patriarch Bartholomew recalled warmly the late pope's gesture.
at November 29, 2006