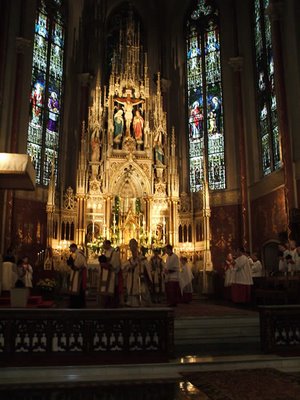 I had several emails on my return from Rome asking if I had heard anything about the Motu Proprio, which has been or has not been signed which will apparently liberate the Tridentine Mass. The truth is I have not heard a dickie-bird.
However there is the French CIEL conference in Rome at the moment. Tonight under the Pope's window there is a vigil to pray for this intention.
I did hear that one of those who is presenting a paper at the conference believes the Holy Father has been made extremely nervous by the reaction of the French Bishops.
All I can say is that the former head of the CDF would know that the French bishops more than any other Episcopal Conference are embedded in a theology of rupture with the Tradition of the Church and are indeed likely to be the very men who would cling to meaninglessness of the 1970s.
As one French priest said to me, "the eldest daughter of the Church has been on the streets for the last forty years".
at November 10, 2006