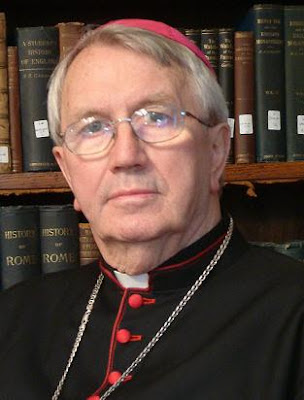 Listening to the second reading and debate on the Human Fertilisation and Embryology Bill in the House of Commons, I was saddened beyond measure. It has been said that the House of Commons is at its best when debating issues of conscience, but do I detect here a growing intolerance to listening to religious or ethical considerations? Again and again the justification given to experimenting on embryonic human beings or killing the unborn was an appeal to 'science' or 'scientific research' as if it were the only source of objective, rational knowledge. It seems that millennia of ethical and religious thought are lightly dismissed as subjective and discredited.
In contrast to the language of utilitarianism in the parliamentary debate that sought to justify the exploitation of the unborn for our economic and medical gain there arises in my heart the words of Scripture that speak prophetically of the dignity of the unborn child:

Every embryonic human person is a wonder of creation, who possesses the inherent right to realise his or her potential for creativity, love, self-sacrifice, and joy. However, our society has so cheapened and violated human life that it does not hear or understand the language of wonder about the unborn.

A dangerous myth appears to be growing that the only knowledge that can inform policy- making is scientific research. Discourse and reason are impoverished when science is used to exclude other branches of knowledge, such as reasoning based on natural law.

Not only this, but we witnessed a flawed, selective approach to science, with the House choosing to ignore the hard scientific evidence provided by adult and umbilical cord stem cell research, that proves that unethical research on embryonic human persons is unnecessary.

What we saw last week in the House of Commons was the misuse of science to justify the continued exploitation and disposal of society's most vulnerable members ­ embryonic and foetal human persons.

As I understand it, there is not a shred of scientific evidence to support those who promote the benefits of creating human-animal hybrids. What we witnessed in the vote allowing the creation of human-animal hybrids was a partisan act of faith that experimentation on embryos will at some distant time result in cures for Alzheimer's, MS and other diseases.

We all hope and pray that medical science will find cures for these diseases that cause such dreadful suffering, but not at the cost of de-personalising the unborn and treating them as things to be manipulated and dissected. Compassion cannot result in the exploitation and destruction of unborn human persons. It is also a misuse of science to employ medical judgements concerning the 'viability' of the unborn child's development as the only consideration that grants the most fundamental of human rights ­ the right to life.

It's farcical to think that the definition of a human person depends on being able to exist on one's own. Human life is a series of inter-related dependencies at all stages of our existence. The State has no moral right to exclude the most vulnerable stage of dependency from the legal protection granted to human life. Any State that accepts the arbitrary use of power over others is immoral. As I see it, last week's vote in the House of Commons perpetuated the immoral use of power over the unborn.

How can it be reasonable that a 12 week old foetus is treated as an unborn child or disposed of as a thing depending on the choice of the mother? Being a person is not something granted by the choice of another, but is an inherent right dependent on the fact of existence. From the moment of conception, the unborn human being is genetically unique from his or her mother and father. The unborn child is a completely new and different living being.

The Catholic Church truly cares for the well-being of women, particularly those agonising over the decision whether to continue with a pregnancy or to have an abortion. I can only imagine that the trauma of rape or the anxiety of a mother unable to cope can feel unbearable. However, I have been told that the grief and distress that many women suffer following an abortion is also unbearable. Confronted with this suffering, we must all do more to support the work of Pro-Life groups that offer counselling and practical support to women who are considering abortion or are struggling to cope after an abortion.

In its strong stand against abortion or experimentation on embryonic human persons, the Church is not saying all who have an abortion or all those who voted for this legislation are evil. But it is the Church's duty to constantly remind society that the act of intentionally killing the unborn embryo or child is always of itself evil.

I would like to personally thank all those Members of Parliament who tabled amendments and voted in defence of unborn human life. I call on all people of faith ­ Muslim, Jew, Hindu, Buddhist, Sikh, and Christian ­ who believe in the sanctity of unborn human life to join with the Catholic Church in redoubling their efforts in the continuing campaign for a change in these laws.

I am becoming more and more impressed by this Bishop the more I hear from him, God Bless him and give him a long life.

Where was this before the bill was passed?

Well that was worth reading, I haven't heard much from the other Bishops and the Cardinal's call for a commission didn't have this Bishop's clarity.

Like St. John Fisher - a lone voice for truth on this hapless bench of Bishops.

The words Abortion or Termination are virtually euphemisms to make us all feel less queasy.

If we called it Pre-Natal Murder perhaps there would be more opposition,if a child was "euthanased " one minute after birth then the charge would be infanticide,later on it becomes murder. The hue & cry that goes up when a teenager is murdered in the street is phenomenal but 2 million murders in the womb in 10 years is OK

May God bless this humble and sef-effacing Bishop, who I had the pleasure of meeting recently,he is speaking the Truth where others have maintained an uneasy silence.

God bless him. His clarity is very refreshing.

God bless this Bishop. He is one voice speaking out loudly and clearly. Where are all the other Bishops?

The Bishop said: "I call on all people of faith ­ Muslim, Jew, Hindu, Buddhist, Sikh, and Christian ­ who believe in the sanctity of unborn human life to join with the Catholic Church in redoubling their efforts in the continuing campaign for a change in these laws."

Let others know about the petition and ask them to sign it.