A miracle on World Youth Day 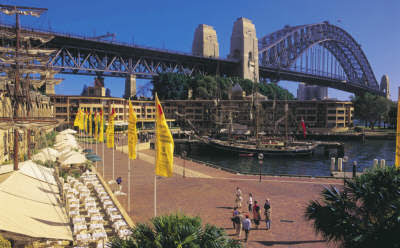 Fr Z, reports:
When Benedict XVI addressed an inner-Sydney congregation on Friday night, he spoke against the worship of the “false gods” of “material possessions, possessive love, or power.” And he asked: “How many voices in our materialist society tell us that happiness is to be found by acquiring as many possessions and luxuries as we can? But this is to make possessions into a false god. Instead of bringing life, they bring death.”
And according to a report in The Weekend Australian, the hundreds of thousands of Catholic pilgrims have been a major economic disappointment:
“The deathly retail silence contrasts with optimistic predictions of a ‘bumper week’ of trade by the state Government and the local chambers of commerce. A jewellery shop reported one sale in the week: a cross. New South Wales Business Chamber chief executive Kevin MacDonald had predicted a $231 million boost for business, or $1155 per expected visitor. But traders reported pilgrims unwilling to spend, even haggling over the price of one banana. Clothing store John Serafino said the Pope’s visit was ‘a disaster’.

”Here in Australia, talk about the economy tends to be the only talk that is taken seriously; the sound of the cash register is the only sound we really respond to. Our public life revolves around the assumption that everything is finally reducible to economic considerations. So thanks be to God for the strange miracle of a “deathly retail silence” in Sydney this week.
at July 21, 2008

Kevin MacDonald and John Serafino -the two quoted business-men are surely Catholics with names like that - or once were.

I think it`s really exciting that they were named in this piece. It takes me straight back to Jesus trawling the fishing ports of Galilee, tapping fishermen and tax-collectors on the shoulder and asking them to follow Him. This could be the moment of the conversion of many. It`s very exciting when the penny drops that making money is not the reason we were created. We should pray for those two men in particular this week.

I am not surprised at this report. I well remember on the route to Wembley Stadium from the coach park on the day of the Pope's visit there, traders were in evidence offering for sale all kinds of papal souvenirs.

They waved their cheap souvenir flags at us hoping that everyone would buy. But we had no need of
these tawdry items. We were all on route for a once in a life time event - Mass celebrated by Pope John-Paul II in Wembley stadium - and our memories of this glorious day would be sufficient without the cheap souvenirs.

I believe I remember reading that there were an awful lot of souvenirs left over after the papal visit to Britain. Its good that the young people attending in Australia also felt no need for splashing out while they were there.

Among the thousands of unwanted mementos pot chalices and ciboria !!!!

well, actually, I bought ome of those tawdry items
om my way to Ninian Park in Cardiff in 1982. A whole £1.50 as I remember. And I wasn't the only one. (from London, bizarrely, yet Cardiff is now my Archdiocese.)

My tawdry yellow and white flag with the Papal crest on it, hung in my tawdry suburban bedroom and subsequent tawdry student rooms as a reminder of where my tawdry loyalties lay.

Agreed, tawdry to some, but Pearl of Great Price to few.

Which makes me want to shout even more loudly: God Bless The Pope.

I'm not sure you'd remember me, I'm Deepak S Fernandes -- I used to be part of the Young Adults group in 2003/2004. I'm right now in the US and chanced on this blog. I am really happy to read your word!

My favourite quote - "its a disaster"

They should have stocked up on brown scapulars and rosary beads.

I guess their hearts were elsewhere
Here maybe?

Remember where the word "tawdry" comes from - S. Audrey (Aetheldhrydh or Etheldreda).

So the pilgrims came with a $10 bill and the 10 commandments and broke neither. As John Wayne would say "Good work pilgrim"

Deepak,
Of course I remember you, tell me every that has happened to you since I last saw you on frray@tiscali.co.uk

Apologies, bernadette, I did not mean to denigrate those who did buy the souvenirs. I used the word tawdry to describe the cheaply produced but overpriced articles which were thrust at us outside the stadium.

You are obviously younger than me! And I can imagine your pride at displaying the flag in your student rooms. My student days were but a distant memory by then but I

would have done the same. Iwas just trying to emphasise that on such occasions memories alone are sufficient for many.

Regarding the comment of the origins of the word tawdry I believe it had something to do with cheap items for sale at a St Audrey's fair somewhere. No doubt there is more on the net.

no no no. apology not necessary - it is amusing to me that the most banal(i.e. religious "souvenirs", or Holy Hardware as my husband calls it) can be quite powerfully used. When I want to re-fill my holy water fonts in the house, do you think I can find the 5 gallon cannister that stores the stuff ? no. I can only find the ghastly, tasteless, plastic one foot high Our Lady, whose blue crown unscrews as the cap....... it just makes me smile. It comes back to God often using the banal and foolish to shame the wise, I think.

The water in the one foot high plastic bottles in the likeness of Our Lady is often Lourdes Water which is not usually blessed and so isn't 'holy water' strictly speaking. This is a common confusion. Is that right Fr Ray?

BB,
Yes Holy Water is Blessed Water or Baptismal Water. It is wrong to call it "Holy" Water, when in fact it is Lourdes or Knock or Walsingham Water.