Pope on the attack 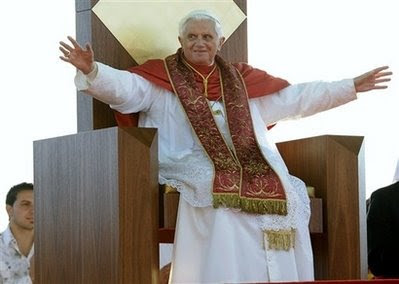 The pontiff reminded the young foreign and Australian pilgrims in Sydney for the Catholic festival of how the apostles stepped forward to 'oppose the perversity in the culture around them' when they established the church.

'Our world has grown weary of greed, exploitation and division, of the tedium of false idols and piecemeal responses, and the pain of false promises,'


The 81-year-old spiritual leader of the world's 1.1 billion Catholics said there were numerous signs indicating 'something is amiss' in modern society.

'In our personal lives and in our communities, we encounter a hostility, something dangerous; a poison which threatens to corrode what is good, reshape who we are and distort the purpose for which we have been created,'

Pope Benedict XVI said alcohol and drug abuse were two of the most prevalent examples of modern ills.


'I ask myself, could anyone standing face to face with people who actually do suffer violence and sexual exploitation explain that these tragedies, portrayed in virtual form, are considered merely entertainment?' he said.

The pope urged his young audience to reject consumer society.

'Do not be fooled by those who see you as just another consumer in a market of undifferentiated possibilities, where choice itself becomes the good, novelty usurps beauty and subjective experience displaces truth,'

The German-born pontiff also blamed consumerism for the environmental problems facing the planet.

'There are scars which mark the surface of our earth, erosion, deforestation, the squandering of the world's mineral and ocean resources in order to fuel an insatiable consumption,'

He condemned modern society's moral relativism, which rejects the concept of absolute truth, saying it led to confusion, a lowering of standards, a loss of self respect and even to despair.

The pope defended the church's right to speak out on public issues, saying it could not remain on the sidelines and allow secularism to dominate society.

'If God is irrelevant to public life, then society will be shaped in a godless image,'

While the pope railed against modern society's ills, World Youth Day organisers have deployed many pop culture tools to promote the event as a hip experience for young worshippers.

They send out a daily text message from Pope Benedict XVI, or BXVI as he is known to mobile phone users, such as: 'The Holy Spirit gave the Apostles and gives u the power boldly 2 proclaim that Christ is risen! - BXVI.'

Festival organisers have also set up a social networking website similar to Facebook to help pilgrims get in touch with each other while in Sydney.

They staged a pop concert after the event's opening mass Tuesday and observers have likened the vast gatherings of tens of thousands of pilgrims to a rock concert.
Pope's text here
at July 17, 2008

Sorry, he already has made it. ahem.

What a bloke. Does any major world religion have a leader to match our Benedict. (NO, they don`t.)

I wonder if World Youth day could be arranged for my town next year. It`s worth asking, isn`t it ? :

Dear Papa B..
This is going to sound like a strange request, but please do not dismiss it out of hand until you`ve read to the end..

A truly wonderful attack. He goes to the root causes of social and environmental blights. Apostasy, broadcasting filth into homes, relentless consumerism and relativism. If God's laws do not govern our societies then something Godless will. No middle ground here.

i know what's amiss with modern culture - it's furniture design. what have they got his holiness sat on? And as for environmental impact. i wonder how many trees were cut down in the making of that colossal monstrosity. Poor man.

Actually, now l think about it, it reminds me of one those 80s cube snake things that were almost as pointless as Rubiks Cubes. How retro..