The Vindication of Humanae Vitae 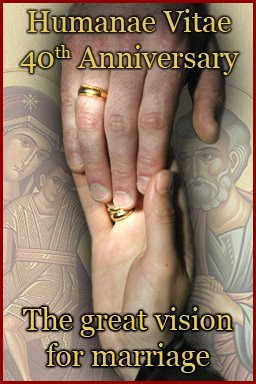 by Mary Eberstadt
That Humanae Vitae and related Catholic teachings about sexual morality are laughingstocks in all the best places is not exactly news. Even in the benighted precincts of believers, where information from the outside world is known to travel exceedingly slowly, everybody grasps that this is one doctrine the world loves to hate. During Benedict XVI’s April visit to the United States, hardly a story in the secular press failed to mention the teachings of Humanae Vitae, usually alongside adjectives like “divisive” and “controversial” and “outdated.” In fact, if there’s anything on earth that unites the Church’s adversaries—all of them except for the Muslims, anyway—the teaching against contraception is probably it.
To many people, both today and when the encyclical was promulgated on July 25, 1968, the notion simply defies understanding. Consenting adults, told not to use birth control? Preposterous. Third World parents deprived access to contraception and abortion? Positively criminal. A ban on condoms when there’s a risk of contracting AIDS? Beneath contempt.
“The execration of the world,” in philosopher G.E.M. Anscombe’s phrase, was what Paul VI incurred with that document—to which the years since 1968 have added plenty of just plain ridicule. Hasn’t everyone heard Monty Python’s send-up song “Every Sperm Is Sacred”? Or heard the jokes? “You no play-a the game, you no make-a the rules.” And “What do you call the rhythm method? Vatican roulette.” And “What do you call a woman who uses the rhythm method? Mommy.”
As everyone also knows, it’s not only the Church’s self-declared adversaries who go in for this sort of sport. So, too, do many American and European Catholics—specifically, the ones often called dissenting or cafeteria Catholics, and who more accurately might be dubbed the “Catholic Otherwise Faithful.” I may be Catholic, but I’m not a maniac about it, runs their unofficial subtext—meaning: I’m happy to take credit for enlightened Catholic positions on the death penalty/social justice/civil rights, but of course I don’t believe in those archaic teachings about divorce/homosexuality/and above all birth control.

One effect of the pill is that house prices doubled in the years shortly afterwards. I know this sounds very far fetched but think about it.