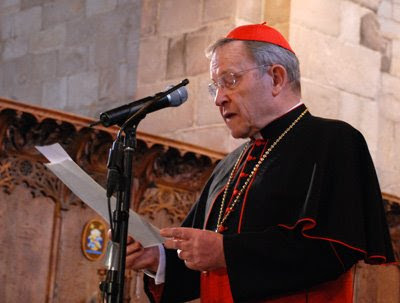 Radio Vatican : The Vatican Council for the Promotion of Christian Unity issued a Statement Tuesday regarding recent events within the Anglican Communion.

The Council is headed by Cardinal Walter Kasper. The statement reads:
“We have regretfully learned of the Church of England vote to pave the way for the introduction of legislation which will lead to the ordaining of women to the Episcopacy.

The Catholic position on the issue was clearly expressed by Pope Paul VI and Pope John Paul II. Such a decision signifies a breaking away from the apostolic tradition maintained by all of the Churches since the first millennium, and therefore is a further obstacle for the reconciliation between the Catholic Church and the Church of England.

This decision will have consequences on the future of dialogue, which had up until now born fruit, as Cardinal Kasper had clearly explained when he spoke on June 5 2006 to all of the bishops of the Church of England at the invitation of the Archbishop of Canterbury.
The Cardinal has been invited once again to express the Catholic position at the next Lambeth Conference at the end of July”.
This week the Church of England's ruling General Synod voted to consecrate women as bishops and approved a code of practice.

The synod members voted to approve work on a national statutory code to accommodate those within the Church who object to women bishops.
The synod rejected compromise proposals for new "super bishops" to cater for objectors - and also their preferred option of creating new dioceses.

The decision to go ahead with work on the code came after more than six hours of debate by the General Synod.

Some 1,300 clergy had threatened to leave the Church if safeguards were not agreed to reassure objectors.
at July 08, 2008

Damien Thompson blogs in the Daily Telegraph today that the Church of England is Protestant again. It has definitively severed itself from its Catholic roots.

It would never have separated from Rome had the magisterial Reformers not stuck their fingers in their ears and convinced themselves that the Pope was the Antichrist, the Man of Sin.

Now, would someone please spell out to them that the Pope couldn't possibly be the Antichrist, as his very job depends on Jesus being who the Holy Spirit says He is and not what the spirit of antichrist says He isn't.

As for the Man of Sin, St Paul's second letter to the Thessalonians is fairly clear that he's going to turn up only when the Last Judgement is chronologically imminent. And that won't happen while the Jews haven't yet recognised their Messiah.

This is excellent news and I hope those who leave the CofE over this will be met with warmth and openness by the English bishops. This is a crucial opportunity for us, and I truly believe we have the right man as Pope to see it through.

But why does His Eminence speak of the ordaining of women to the Episcopacy?

Surely they are consecrated?

Michal,
Following tthe Avignon confusion and excesses, the debauchery of the Borgias and the politicking and grasping of Julius II, one might be drawn to a position that inolved that involved just a certain uncertainty.

Father - do you think the time has come for disestablishment?

Father, I don't think the debauchery of the Borgias and the politicking of Julius II would have been a convincing argument that the Pope was the Man of Sin.

The Bible clearly states that this figure will be energised by Satan himself, and the thing about people like that is their machinations go way beyond the desire of the human heart for evil.

The Armenian genocide is one example of Satanic evil; the crimes of the Nazis and the Communists are others, and so are the things that happened in Rwanda and Yugoslavia in the 1990s.