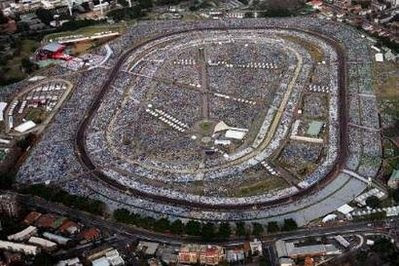 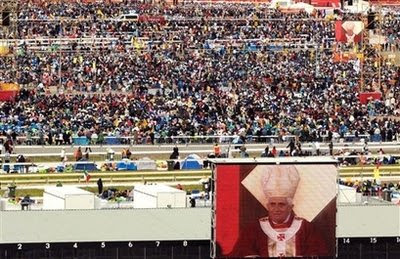 The last Mass of World Youth Day has been celebrated, the Pope has said some pretty exciting and challenging things. Priests have been overwhelmed by the number of Confession, you get the hint that some of Catechesis given by the Bishops has been pretty outstanding.

I don't know what has appeared on the television but here the the reporting on BBC Radio 4 has been appalling, one or two phrases of the Pope have been reported, but practically all the emphasis has been placed on the Pope's expression of shame for sexual abuse by clergy, when that has not been reported, there has been a great deal of emphasis on protesters against the Papal visit.

The BBC seems to give the impression that the Pope visited Australia only to apologise for the sins of Australian clergy and was met by hordes of homosexual activists, who seem to make up the majority of Australian population, who were handing out condoms to a few other people.

It seems that in the UK there are are an extraordinary number of people who are involved in promoting "gay culture" are also employed by the media, the BBC seems to be dominated by this small but powerful group. I don't have much of a problem with men or women with a same sex attraction, but the gay movement is worrying when it becomes a political force that filters out certain news and views.

As far as the Catholic Church is concerned it seems that within the BBC there is an informal coalition of seriously anti-Catholic elements. The Church, the Pope especially, are seen very much as the enemy. That is most probably not unreasonable because both Pope and Church are and should be the bitter enemy of the consumerist, self indulgent, highly personalistic hedonism that seem to be the very basis of the UK media and in particular the BBC.
at July 20, 2008

"The last Mass of World Youth Day has been celebrated."

I pray your words to become prophetic.

Nick Bryant, the Man in Oz, did something very odd. He wrote a script which didn`t fit with the pictures, suggesting a political agenda. Millions of happy, joyful young Catholics illustrated a script about abuse scandals. It was really bizarre to watch. Appalling journalism. It would be like using The Changing of The Guard live pictures to have a rant about foreign policy in Iraq.

The place IS run by a Gay/Liberal maffia. I would stop handing over your £131.50 a year and be relieved they don`t pay your mortgage as well.

It is possible to complain directly to the responsible journalist at the BBC by email. There is also BBC Complaints, and if necessary the BBC Trust and ultimately OfCom. The BBC gets away with behaviour like this precisely because no-one ever makes a formal complaint.

Similarly the Lambeth Conference will be reported as concerning only the gay issue.
It's not a BBC antiCatholic agenda

I have similar feelings Father, about the whole ‘gay agenda’ business. I concede that people with SSA have a difficult time trying to remain faithful to the Commandments. But we all have tendencies and temptations to contend with. Even St. Paul spoke about a “thorn in the flesh” that he asked God to remove from him – more than once!

What gets me about the gay lobby (and they are very influential in the Media and Show Business here in the US…) is that what started as a quest for ‘acceptance’ and ‘understanding’ (which I can endorse) has now become a quest for ‘approval’ (which I cannot endorse). Love the sinner, but hate the sin!

All of us have crosses to bear. To imply, as many ‘gays’ do, that their cross is heavier or greater - and in need of ‘special consideration’ - than that of others, is the sticking point. It is narcissistic and self-centred and hews to the ‘victim’ line so common in society today. As we say over here: “Get over it, already…!” Many people have more problems to deal with than you. There’s more to life than sex!

The BBC has a 'Have Your Say' section attached to every news story. But this is with a caveat. You cannot 'have your say' if it is said in any way offensive. But offense is in the eye of the beholder: "Do not post messages that are unlawful, harassing, defamatory, abusive, threatening, harmful, obscene, profane, sexually oriented, homophobic or racially offensive."

Well, what is harassing to one is just truth to another. If you cannot post anything that is "sexually orientated" or "homophobic", which is of course offensive in the eye of the beholder, then you cannot say anything derogatory about gay culture.

Fr Heron,
"It's not a BBC antiCatholic agenda", you are right, I was simplifying for brevity, but the Catholic Church tends to get brunt of it because it stands against this agenda.

The reaction of the press has been a real eye-opener even here in Australia. A comment made to me by a non-Catholic who was in Sydney last week said it all. He said that to see so many thousands of young people having a good time with not a can of beer in sight was unbelievable. Some of our press has been really hunting bad news but has been disappointed and totally frustrated. The people of Australia of all peruasions have been very impressed and no amount of media bias can counter what people have witnessed on SBS (non-commercial) TV. Even the dourest of Catholics cannot fail to be impressed!!
Paul Gubbels, Dandenong

In order to understand what has been going on in the BBC for the last 40 years, this Wiki entry for Gramsci makes interesting reading.

"Gramsci argued that the failure of the workers to make an anti-capitalist revolution was due to the successful capture of the workers' ideology, self-understanding, and organizations by the hegemonic (ruling) culture. ... Instead of working towards a revolution that would truly serve their collective needs, workers in "advanced" societies were ..... accepting the guidance of bourgeois religious leaders.

Gramsci therefore argued for a strategic distinction between a "war of position" and a "war of manoeuvre". The war of position is a culture war in which anti-capitalist elements seek to gain a dominant voice in mass media, mass organizations, and educational institutions to heighten class consciousness, teach revolutionary analysis and theory, and inspire revolutionary organization. Following the success of the war of position, communist leaders would be empowered to begin the war of manoeuvre, the actual insurrection against capitalism, with mass support."

In short - like many other large organisations, the BBC has fallen prey to entryism - and this was no accident.

For any marxist - a strong and united Catholic Church ticks all the wrong boxes that it is possible to tick.

Long may it tick them off.

I have just written a reasonably worded letter to Mr Mark Thompson, the Director General of the BBC. I have found, in general, it helps to by-pass officialdom, such as complaint lines, and to write sincerely to a named person.

It can take some time to find out who that named person should be, but this is a straightforward one. (It appeals to peoples' sense of dignity as a precious and unique human being, created by God, for no other reason than that He loves them for who they are, whether they recognize it as such or not).

I encourage anyone who would like to do so to er.. do so. E-mails are a waste of time; so are phone calls. Get some nice bonded or vellum paper. Hand-write it. In ink (but not green). Stick a stamp on it. You know, like we used to.

He has to reply, and the reply will carry more weight than to an e-mail. (E-mails can be: forwarded to anyone, manipulated, dismissed, misused. Personal letters still carry proper weight and more integrity.)

Then in two weeks' time, lets all compare replies ! (Thereby, if nothing else, creating another post for Fr Blake.)

MARK IT: PERSONAL AND CONFIDENTIAL.

Someone with an address THAT long wil be very, very impressed that you wrote to them. I'm looking forward to my reply already....

Most days I try to watch one news bulletin and I was interested to see how the Pope's visit would be reported.

I must have blinked if it was reported as I did not actually see any report at all! In contrast the nightly news on France 2 did cover the visit with pictures and comments and the French Catholic TV station (also available on the internet) KTO has videos available.
I do wish they would break them up into small sections - one of them is 180 minutes long!

I have been banging on for years about the corruption of the BBC and the British Media in general.

And under threat of severe penalties we have to pay for the incessant garbage.

They are controlled by blackmailing pressure groups like Stonewall and their ilk.

It seems to me that these corporations should have democratically elected controllers.

On the subject of the media I was amused to see a quote from The Times on Fr Zs blog today.

Referring to a lecture being given at the Lambeth Conference entitled 'Never say no to Media' the journalist asked if she could attend. They said 'no!'