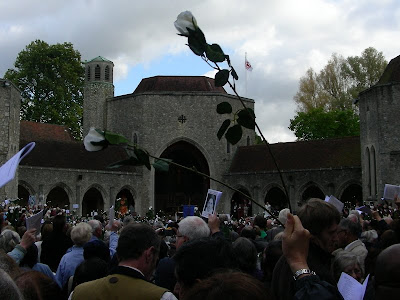 We went by coach to see the relics at Aylesford and met everyone, well Ponte Sisto, seminarians from Wonersh, two fronm my diocese, tons from Southwark, one from Oscott, Fr Stephen Langridge who was almost fighting off small potential vocations who wanted to take away buckets of his vocational material. I met a reader, a young women who asked for prayer, that her documentation might be sorted out so she might begin her postulancy in the United States.
There were quite a few people from own diocese too, including one of our Vicars General. 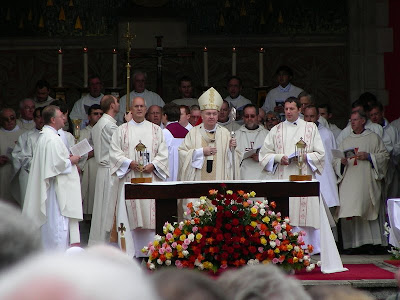 We arrived just after nine and only had to wait about half an hour to venerate the relics, those who did so after Mass I think might have had a wait of several hours. The congregation at Mass extended to halfway round the duck pond, apparently there was a tail back from the friary to the motorway. It's wonderful when Catholics cause so much havoc.
I had a chat with some amazing Ghanaian women, who wore costumes printed with pictures of St Therese. It was impressive to see so many young families, especially young men. Talking to some people it seemed that quite a few of those there weren't attending Mass every Sunday but were happy to accept the invitation to be evangelised, to do something, to be present at something, to be moved by something, to demonstrate their faith, even if was just to themselves. I couldn't imagine many of those I spoke to wanting to join a "small faith sharing group", but they were at Aylesford today.
I thank God that over the next few months there will be many more occassions for such demonstrations or manifestations of faith.
Thanks to Sergey for the photographs
at October 10, 2009

I'm off to join the all night vigil now - I am so happy because my son has agreed to go with me to Kensington tomorrow night. I will pray for all bloggers - those I agree with and those I don't ;)
I've already been to Portsmouth overnight (well until 3.15am) and called in at St Chads in Birmingham on my way back from delivering my daughter's stuff at uni in Sheffield. St Therese is helping me a lot to get my house in order...

I'm delighted you got to go! [I figured you were, given the "radio silence" earlier today.

This is quite a fair piece (well, not what we normally expect from the secular press) http://www.guardian.co.uk/world/2009/oct/14/relics-saint-therese