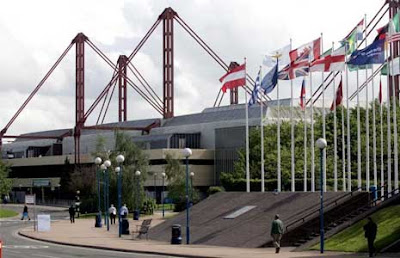 Where is Newman's beatification to take place?
Birmingham Oratory? Is most probably too small.
St Chad's Cathedral? Again too small.
There has been mention of Birmingham's National Exhibition Centre, pictured above, but do we really want a Newman forever to be associated with Cruffs, Abba Concerts, Motor and Caravan Exhibition.
The date is fixed, apparently, the beginning of May. The rumour that has been going the rounds lately is that it will take place in Rome, possibly at St Paul Outside the Walls.
A Roman venue, though a disappointment to many Brummies, will give the possibility of a "national" pilgrimage to Rome prior to the visit of the Holy Father to Britain. It would also mean that the vast number of those who venerate him from the USA and the rest of the world could join in the celebrations. Birmingham could then have its day with a Papal visit.
If that is so, all I ask is that the Fathers of the Birmingham Oratory are in charge of the liturgy of beatification.
at October 07, 2009

Do you have any suggestions why St Paul's outside, it wasn't his titular Church

NEC great for exhibitions but for a Catholic celebration of this magnitude - YUK!

Next they'll be suggesting Wembley Stadium!

Rome - YES, followed by a Papal visit to Birmingham for a special celebration!

What evidence do we have that the date of the beatification is fixed and that it will be in May? I have not seen this from any official source.

Also many seem to be assuming that the Holy Father will preside at the beatification. My understanding is that this is unlikely.

You say that the beatification in May would be before the papal visit, which everybody seems to be assuming will be in September. Is there any evidence for this?

I ask these questions because I am interested in planning some event to mark the third anniversary of Summotum Pontificum, and it is difficult to do this with so much uncertainty about these two major events.

Can anyone shed any light on the matter?

Why not just do it in a church? People can stand outside if they really care.

Is there anywhere in Oxford?