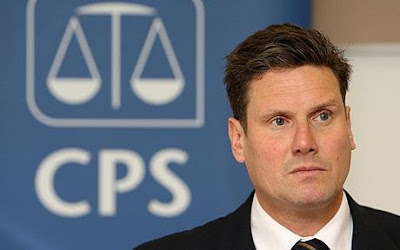 I tend to believe in co-incidences rather than conspiracies, however MPs Ann Widdecombe, Jim Clark and Jim Dobbin have asked, in an Early Day Motion why the Director of Public Prosecutions, Keir Starmer brought Kay Gilderdale to trial for murder for assisting her daughter to commit suicide.

b) why he should have brought an attempted murder charge when he has never even brought a prosecution for assisted suicide under the Suicide Act 1961.


Is this a misuse of his Office or the fruit of a government so myred in spin that uses that it uses this sad case to form public conscience?
at January 26, 2010

Mr Starmer has previously strayed over the line between a disinterested upholding of the law and political/personal expressions regarding assisted suicide.
Did he gamble in this case that a compassionate jury would return a "not guilty" verdict of the more serious charge, thereby undermining the law which he is charged to uphold?
I must say I prefer my DPP to keep his own counsel and not to wear his heart on his sleeve.
On a bit of a tangent, good news that the Lords trashed parts of the Equality Bill, another back- door effort by the secularists to undermine religious belief.

The question in most of the "Garbage Press" was "why was this woman prosecuted and put before the court".

Well the answer is she assisted a Suicide and that is supposed to be against the Law of the Land.

Brainwashed Juries can't be expected to know what to do,the court has deliberately contrived this outcome and now we can look forward to Euthanasia,if not to save the planet but to save the "hard pressed" Local Authorities who are inundated by Bed Blockers and other unproductive members of society.

Sadly, Father, I find myself increasingly forced to consider the conspiracy explanation in so many modern socio/political developements.

The last forty years have demonstrated how small groups of liberal thinkers, can inflitrate politics and the media, and massively change public opinion.

Films, soap operas and of course unsound court cases, are but examples of the tricks they use to project their views.

That middle 33% or so of the population is so easily influenced - particularly when the Christian and Catholic voice is conspicuous only by its silence.

Nickbris,
The question is why were others not prosecuted?

I strongly suspect that this is more accurately viewed as a sort of 'opportunist incompetence', with the Government using such cases as a way of testing public opinion in order to formulate a legal position which can then be enforced in the knowledge (belief ?) that it enjoys majority public support.

It seems stupid, because it won't work, and irresponsible because it's an abdication of the very responsibility for which they wanted to be elected, and for accepting which they are so heavily overpaid !

Society is being conditioned to accept assisted suicide as 'choice' much the same way as abortion is sold to us in terms of choice.

I thought that DPPs had been rather compromised since one had a little trouble with the law himself in the Kings Cross area.