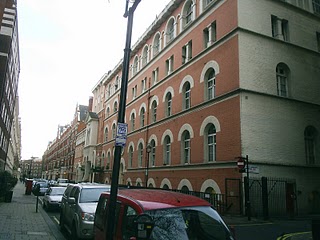 What has happened to the Daughters of Charity next to Westminster Cathedral? I used to think they were a good thing. Before Christmas they had Stephen "I think the Catholic Church is evil" Fry fronting the appeal for their appeal for their homeless centre, "The Passage", then, I accepted their explanation that it was naivety. Now they are hosting a meeting for the dissenting group that includes such speakers such as Robert Nowell, critic of Church teaching, translator of Hans Kung and assistant editor of the Tablet  and Sr Myra Poole, critic of Church teaching and women's ordination activist.
They belong to a group STANDUP4VATICAN2, which seems to be very much in the vein of  "We are the Church" and other "Nu-Church" groups, its chairman is a Bernard Wynne who also runs Catholics for a Changing Church. Though it claims to "stand up for Vatican 2" it is run by a gerontocracy who want us to see VII as a rupture with the Tradition, very much at variance with the teaching of the Holy Father and the Council itself.

Obviously this an attack on the direction the papacy is taking the Church. These old men and women want to turn the clock back, stifle the Spirit. They are terrified by the effective ecumenism of the Pope, of his liturgical liberalism, his assault on secularism and his placing God at the centre of Church life.
There is a poll you might want to vote on.

Sad, that the sisters have allied themselves to this cause, are they really a hotbed of dissent or just hosting this group for the money or through stupidity?
at January 15, 2010

I can tell you : The toxins of the 'All Hallows' effect by the vincentians allowing modernism and lay-centric mania rend their notions, praxes and teachings on Holy Mother Church descend into chaos , historical revisionism and mendacity.
Find a daughter of Charity and you'll find their bookshelves strewn with Kung, Chittister, McBrien and a vast array of pop psychology that tells them they are sexual women with reproductive rights and a dignity which should empower them to dismantle the cruel rigorist doctrinaire patriarchal hegemony of the Vatican which alienates the divorced, the GLBT2S, the separated sisterhood , those who have exercised their right to female autonomy and those oppressed, suppressed women who are called to exercise their hitherto denied vocation to the presbyteral ministry....

..they'll merely affirm that they are participating in the natural gender-alligning paradigm shift towards being eucharist in today's non-gender specific world...

I used to live and study with them...

This new organisation is a method of trying to bring together various dissenting groups into a unified group if possible. Bernard Wynne was one of those who stirred things up in Blackfen recently. The lead is being taken by the old "Catholics for a Changing Church group".

The ones around here (Daughters of St. Paul) seem quite orthodox. The run a Catholic bookstore in town. One of my high school classmates has been with the order for some 30+ years, and works in Texas.

They certainly wear traditional habits, and their bookstock isn't "questionable."

But look on the bright side. These days if you sit behind them in the Cinema, you can at least see the film. Hurrah for V2 I say!

This is truly dreadful - Thank you for setting all this out. It makes me think of the 'emperors new clothes' - the stupidity of those who cannot see or refuse to see how crazy it is to host such events at a Catholic venue. It is such a betrayal of Saints Vincent and Catherine Laboure. I suppose one does have the consolation that most of these people will die off in the next few years........I refer here to the 'barely able to stand up for vatican 2' crowd.

This is truly dreadful - Thank you for setting all this out. It makes me think of the 'emperors new clothes' - the stupidity of those who cannot see or refuse to see how crazy it is to host such events at a Catholic venue. It is such a betrayal of Saints Vincent and Catherine Laboure. I suppose one does have the consolation that most of these people will die off in the next few years........I refer here to the 'barely able to stand up for vatican 2' crowd.

Father, as far as I can see, your link to "a poll you might want to vote on" takes one amongst other things, not to a poll for or against, but to a petition IN FAVOUR of the line this lot are taking. And that - as the description in your post rightly tells us - is the very last thing we want to be putting our names to.

Looking at the website, the meeting has now been moved to a hotel.

The reason given is that more people than expected want to attend.

I read that due to the amount of people wishing to attend they are now meeting in a hotel, but they can't provide tea or coffee due to expense! Likely story - I think someone somewhere has pulled the plug!

Robert Nowell is not the first Nowell, and he certainly won't be the last!

The poll is immediately below the petition.

I've just responded a second time to the poll(!) and there were 75 votes in favour of the statement that the Church had abandoned V2 and 480 against!

Venue has been changed
Quote from their site."More people than we had anticipated want to come to the meeting on the 26 January so we have had to change the venue. The meeting will now be held in the Combined Suite at the Westminister Thistle Hotel, 49 Buckingham Palace Road (corner of Bressenden Place and Buckingham Palace Road), London SW1 W0QT Tel: 0871 376 9039. (3/4 minutes walk from Victoria station)

Nothing else has changed the meeting will start at 7.00pm and finish at 9.00pm. Because of the additional cost of using a hotel we are unable to provide refreshments (tea/coffee) but of course you can get a drink in the hotel if you wish.

We have tried to make sure that everyone who told us they wanted to attend the meeting has received this message or been told by post but it would be useful if you could tell anyone else you know who is coming about the change.


JUST WONDERING HOW BIG THE PRIOR VENUE WAS -- IS IT TOO MUCH TO HOPE THAT THE CHANGE IN VENUE IS ANYTHING TO DO WITH PERMISSION BEING REVIEWED FOR THE ORIGINAL VENUE?

Laicus - the poll is found just below the petition...

If you look again they've changed the location of their meeting to the Thistle Hotel.

I think that they changed the venue because they're expecting a larger crowd. I do not think that their bishop or their superiors rebuked them because surely if they had been rebuked the meeting would have been cancelled.

The website of “Standup for Vatican2” allows anybody to give a testimonial. Here is the one from the well-known dissenter Martin Pendergast. Anybody understand what it means, other than “I want to pretend that Vatican 2 said it was OK for Catholics to be practising homosexuals”?

I stand up for Vatican 2 because it opened the Church to contemporary realities, allowed the Light of the Peoples who is Christ to be discerned in all areas of our human experience for the liberation of all, and encouraged us to celebrate this in truly communal liturgy, prayer, and action.


Then there is this cracker:

I stand up for Vatican II because it continues the tradition of previous ecumenical councils. Also, it called for the retention of Latin in the liturgy and required pride of place for Gregorian chant.

Mike - have you actualy followed the link from Mr Pendergast ?

Bidding prayers for civic unions AND a citation from a celebration mass for civil partnerships !!! [although it notes in the fine print that the sohomasses do not provide such events]
I kid you not !

What the hell is Westminster Archdiocese playing at allowing this ?

Thanks for telling me that the poll was immediately below the petition. But I'm still very puzzled.

I've just now clicked on Father's link to the Standupforvatican2 website, and on my screen there is NO poll immediately after the petition. Clicking on "Petition" at the top brings up the petition form and nothing else. The same if one goes to all three pages of the site in turn.

Have the petition organisers removed the poll, or what?

Oh, I see now that clicking on "Contact us" at the top brings up a form on which people can give their name and e-mail address and respond to "Please tell me [Bernard Wynne, Campaign sponsor] why you are standing up for Vatican 2". Probably this is where orthodox Catholics are giving their comments, not in signing the petition.

ONLY, I hope that those responding on this form will not be counted as though they were signers of the petition. They should not be.

I still cannot find the poll. It does not seem to be there now.

Well at least those attending the event at the Thistle can enjoy a good but expensive meal and have the use of several bars there. I hold my own bloggers meets over lunch there. So why not join in the fun and go along and see who attennds and speaks? The hall ata the Convent if I remember rightly holds about 120. The thistles biggest lounge over 200. Much more expensive for that shower to hire though !

How very pathetic. The vote originally started on 24/12/09 now it says that it started today.

Last night there were hundreds voting 'no' today there are ten!

That's the democracy they want. Astounding - NOT!

Written by Bernard Wynne
Saturday, 16 January 2010 10:42
Do you think the Church has abandoned Vatican II ? Due to multiple voting taking place with this poll we have had to install a more robust polling solution. This means that you will need to vote again. I apologise for this. Voting only takes seconds. You will only be permitted to vote once from the same ip address. Thank you for your patience and understanding.

The poll asks the question: Do you think the Church has abandonned Vatican II? This is an ambiguous question, and whether one answers yes or no, a range of interpretations can be put on the vote.

I therefore suggest that everyone simply ignores the poll.

The re-starting of the poll reminds me of the "Animal Farm" solution: if the voters aren't giving the right answer, change the electorate!

poll and testimonials have now vanished !

They've now got 161 signtures on their new petition - not all of them by any means true supporters of it.

Judas Iscariot is No. 161!! I've printed out the list with his name on it, just in case it gets deleted.

Don't sign this loathsome petition, even though signing it gives one the opportunity to add comments.

Proof yet again that 'the devil never sleeps'.

Dissent, disquiet and heresy on Westminster's doorstep - ahh, but the E&W Bishops are out to lunch - No Comment.