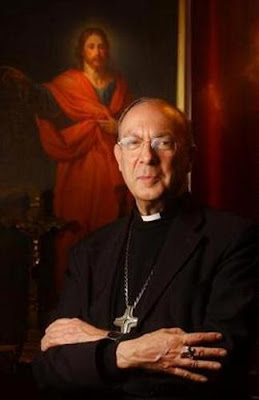 I like what I hear of the new Archbishop of Brussels, Mgr André-Joseph Léonard; he has taken the name Joseph the patron of Belgium, which seems a good sign of his marriage to his diocese. He’s 70, he’s got five years. I am in favour of old men in a hurry. Like Pope Benedict he seems to have set himself and his diocese clear priorities. Great Popes, great Bishops seem to have had limited reigns. Younger men seem to think they have all the time in the world and perhaps achieve little because they spread themselves too thinly.


The new Archbishop seems to want to get to know his clergy by visiting his diocese. He wants to promote prayer, through reverent celebration of the liturgy, in line with the tradition of the Church and through Eucharistic Adoration. He has already proved himself avid in promoting vocations 35 of Belgium’s 71 seminarians are in his former diocese.

He is going to be a complete change from Cardinal Daneels who seems to have been around since the dawn of time. That seems to have caused problems from the media, especially as he has suggested the Belgium Church, in the immediate past has been to passive. If you haven't done so yet sign the petition in support of him. I am 3263.
at January 21, 2010

Already signed earlier today! Knowing nothing about the Church in Belgium I was very impressed reading the details of the new Archbishop.

Apparently he speaks both French and Flemish which of course is a great advantage in this linguistically divided country. I read somewhere that when the vernacular came in if the Mass was in the 'wrong 'language people were encouraged to protest by remaining silent
at the responses.

I have only spent a few hours in Brussels on one occasion and found it most curious as French seemed to be the language for signs in the city and yet in the area around it all the signs were in Flemish. I have no idea in what language Mass is celebrated in the Belgian capital but it would seem a perfect example of a country where Latin would be the most sensible language of the Mass. The people could then follow it in whatever language they wished.

I do hope the new Archbishop will have the support of all his Priests over the next few years.

I'm a Brit living in Brussels and I'm absolutely ecstatic with this news. He is desperately, desperately needed.

The announcement caused the usual suspects to crawl out of the woodwork and denounce him in the most hysterical terms. But that actually worked to his advantage, as they overplayed their hand, and he came across as calm and reasonable.

I think also, deep down, even 'spirit of vatican II' types know, in their hearts, that the game is up. They have had a freer reign in the Low Countries over the last 40 years than almost anywhere else, and the result is a wasteland of total desolation (no, this is not hyperbole).
One Flemish anti-Catholic said to me 'but Léonard will empty all the churches' (as if he cared). I just laughed in his face, and he finally admitted with a grin that the churches are already all empty, thanks to Danneels.

I too signed some days ago.

It's interesting to note from the Catholic Hierarchy site, that of the 9 dioceses in Belgium (including Military ordinariate, whose Ordinary is Cardinal Daneels), only one has a website - Namur!

It's also interesting to note that Cardinal Daneels appears to remain as bishop of the Military Ordinariate.

Mass is celebrated in Flemish and French in Brussels (in Latin too ???)


The news about Bishop Leonard is excellent. Please pray for him and those in the Belgium church who are trying to revive it.

"Great Popes, great Bishops seem to have had limited reigns. Younger men seem to think they have all the time in the world and perhaps achieve little because they spread themselves too thinly."
I think John Paul II did okay, for a young bishop and pope, and he reigned a fair old while. Not to mention Blessed Pius IX and Leo XIII. You're right, of course, in that we have Blessed John XXIII as a shining example of a great pope. Elected as an older man, perhaps even a caretaker, and from him we get the calling of the Second Vatican Council.
I'm confident, and hopeful, the Archbishop Elect will be a wonderful success for both Belgium and the wider Church.

I am a little surprised, although gratified, to see such support for Archbishop Leonard in these columns.

It is possible you are all unaware that the good Archbishop is a strong supporter of both Medjugorje and Vassula.

I hope this news might encourage some renewed discernment of these two important gifts from the Holy Spirit. The alternative, I suppose, would be to 'ditch' the Archbishop after all.

I don't normally follow blogs but the recent 'who-ha' regarding Cardinal Schonborn's important visit to Medjugorje led me to so many Catholic blogs which sadly seem to be mostly negative about Medjugorje.

Pelerin - when the changes came in there were fights at Mass between the French speakers and the Flemish!
A very good reason for having the Latin Mass. The vernacular is often a force for division eg in India where congregations are split by the caste sytem. Tamil, Hindi, Urdu and many other languages now all attend "their own" Mass.
In Kerala and other places (since the Motu Proprio) there is the start of a return to a unified congregation with the EF Mass.
Belgium certainly needs a traditional hand at the helm. I have signed.