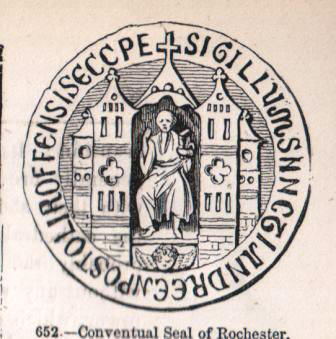 Fr Z has an interesting post in which he applies his red script to a statement by a Bishop Vasa from the US arguing that Excommunication should be used in cases where grave scandal is given the faithful. The ever fascinating Lion and Cardinal by co-incidence has this text of an Excommunication from the Rochester Library.


We excommunicate and anathematise him, malefactor, and from the thresholds of the Holy Church of God Almighty we sequester him, that he may be tormented, disposed and delivered over with Dathan and Abiram, and with those who say unto the Lord God, depart from us, we know not Thy ways. And as fire is quenched with water, so let the light of him be put out for evermore, unless it shall repent him and make satisfaction. Amen.


May the holy and eternal Virgin Mary, Mother of God, curse him. May St. Michael the advocate of holy souls, curse him. May all the angels and archangels, principalities and powers, and all the heavenly armies, curse him.


May St. John the forerunner and Baptist of Christ, St. Peter and St. Paul, St. Andrew, and all other of the apostles of Christ, together curse him. And may the rest of his disciples and the four evangelists, who by their preaching converted the whole world, and the holy and wonderful company of martyrs and confessors, who by their holy works are found pleasing to God Almighty, curse him.


May he be cursed wherever he be, whether in the house or the stables, the garden or the field, or the highway, or in the path, or in the wood, or in the water, or in the church. May he be cursed in living, in dying, in eating, in drinking, in hungering, in thirsting, in fasting, in sleeping, in slumbering, in walking, in standing, in sitting, in lying, in working, in resting, in pissing, in shitting and in bloodletting.


May he be cursed in all the joints and articulations of his members, from the top of his head to the soal of his foot: may there be no soundness in him.


May the Son of the living God, with all the glory of his Majesty curse him, and may heaven with all the powers which move therein, rise up against him and damn him unless he repent and make satisfaction. Amen. So be it, so be it. Amen.

Wow! That sure does sound serious!

" May he be cursed in living, in dying, in eating, in drinking, in hungering, in thirsting, in fasting, in sleeping, in slumbering, in walking, in standing, in sitting, in lying, in working, in resting, in pissing, in shitting and in bloodletting."

Indeed. That IS telling 'em.

The liberal bishops would be appalled to read this edict or statement(they may say "this is uncharitable")and the knees of person to be ex-communicated would probably tremble when he/she hear this decree. LOL

Good heavens! That certainly doesn't sound like a "medicinal penalty".

"Bless and do not curse," says the Lord. Certainly I would not want to be on the receiving end of this imprecation, nor on the issuing end either. "He loved cursing. May it come upon him. He took no delight in blessing. May it be far from him."

In all the history of the Church I wonder how often such a prayer has been publicly offered, and what were its effects- if known.

Excommunicand: "Does this mean I'm fired, then?"

That excommunication is what I would call "Over the top" and leaves hardly any room for repentance; It might have the opposite effect on the victims behaviour ! Do you have a copy of that wonderful excommunication in the library of (I think)Salamanca which speaks of an excommunication specially reserved to the Holy See for anyone who fails to return books borrowed from the library ? It is or was available as a printed copy. There is one at Downside.

What a pity excommunication was in history often used for political reasons. An Irish bishop in nineteenth century Newfoundland ,Bishop John Thomas Mullock , put a whole community under a one year ban for disregarding his instructions as to how to vote.

What a pity too it often can be regarded as a mistake. I understand from Fr Vidmar's book that the early Catholic historians such as Lingard thought it was a mistake to excommunicate Elizabeth I by the Bull "Regnans in Excelsis" which put Catholics in an impossible position.

One wonders why according to Newman was St Athanasius subject to Papal excommunication. Why was Hitler never excommunicated? Is it because as Owen Chadwick maintains the example of Elisabeth I suggested to the Vatican that such action would be counter-productive? Why are the pro-abortion politicians who parade their Catholic allegiance in Britain and the USA not excommunicated?

Is it an arbitrary matter or is it subject to law? Apart from not returning the books to the library in Salamanca what indeed must someone in the Catholic Church do to be excommunicated?

Thank you, Father. Most useful!

Even St Mike called upon to curse?... the Angel who said to Satan 'May God rebuke you'???

The Salamanca excommunication is here:
http://www.studiolum.com/wang/es/2007_06_01_archive.html
(sorry, don't know how to do the linky thing)