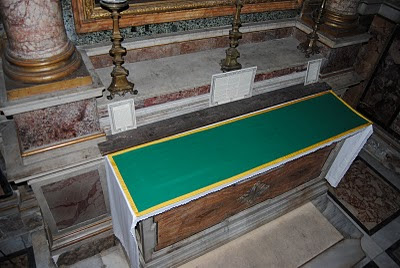 This is a picture from John Sonnen's amazing blog. It is, I think, the altar I had the privelege of offering the Holy Sacrifice of the Mass on in Rome a couple of weeks ago. It is the FSSP Church of Ss. Trinità dei Pellegrini, it was part of the hospital complex where St Philip Neri and the primitive Oratorians washed the feet of pilgrims to Rome.

It was quite strange experience, there was no congregation just me and the angels and saints. The footpace of the altar is incredible narrow and rather rickety, it is difficult to genuflect on, I tried kneeling on it for the prayers after Mass, it was so uncomfortable and my knee was playing up, I ended up by standing, I know, I am unmortified!

I was so overcome by the history of the place, all those countless priests who had stood where I had stood, said what I had said, that long line of holy and not so holy men. That's the "kick" I get out of the old Mass in an old Church, at an old altar, it is something about "roots", or the hermeneutic of continuity.

But it was more than that, I was struck by what an immense privelege it is to simply offer Mass and even just to be able pray, to continue what had happened in that Church and the City of the Martyrs for centuries and would continue to happen long after I am no more. There was something immensely consoling to know my prayer, and maybe St Philips, somehow mingled at the same altar. That somehow it was of tremendous importance and yet of no imporrtance.

One of the beautiful things about the old Mass, for a priest, at least this priest, is that nothing depends on him, all is really about what God does. The priest just stands in God's presence and serves bringing nothing of himself, just his priesthood - it is wonderful to be there.

'That somehow it was of tremendous importance and yet of no importance.'

I wonder if you were sensing eternity, albeit for now, through a mirror-lit-dimly?

We live in the shadowlands....(and I blog in them haha!)

Father Ray - you put that across so beautifully. Thank you for an inspiring start to my Saturday.

Thank you Father, for this evidently heartfelt testimony to submitting to the Mystery of the Church.

For various reasons, I have been intensely surfing/discovering the "Traditionalist blogosphere" of late ...

And have been struck by how much testimony there is to the _outer_ events of our times.

For example a certain election in Massachusetts.

I am not suggesting that such things are not important. They are.

But somehow I am longing to see more testimony to the Invisible Reality which as you say can be so "immensely consoling" in a world ever more geared to the purely outer and materialistic ...

I hope young people who are considering becoming priests will read your post. They might realise what an immense gift is priesthood.

I had somewhat the same feeling at Mass last night, opening the pages of my 1950's missal, for the first time in 50 years - perhaps the first time ever - to the Mass for Jan 22nd. A congregation of 10 or so - it has been slowly but steadily growing. And with teenagers in the pews and on the altar. Not even a first Friday. My thanks to all the wonderful priests and servers who bring this joy to us.

Next year in Jerusalem?

Divine comment, Fr. Many thanks and blessings to you.

We should all offer up a prayer that more and more priests come to the realization that the EF is a powerhouse for prayer and an inestimable treasure given to us by Holy Mother Church.

Ad multos annos to our Holy Father Pope Benedict XVI, that he may persevere.

Finally let us pray for the Bishops and clergy of this land of ours, that they may wholly submit to Our Lord's Will and obey His Vicar here on earth.

Dillydaydream, I liked what you said about the missal.

My "go to" missal during the Mass is the 20s one. It was a small "seminarians missal" that I acquired when my parish was "getting rid of some old books from the shelves."

The 50s missal is great for the comments, and the "new" '62 Missal is good to make sure I can get all the Latin/English translation in parts I'm shaky on for the propers. I read those before hand (I'm not too bad on the gospels but Paul, I confess, is not my "go to" guy when I pick up the new Testament...so I can do fewer passages from memory to fill in the bits.)

The 20s missal is the one I use during the Mass, because I don't have to flip very many pages, and a lot of the times the propers are all in at most two places.

It was originally owned by James Houlihan and he recieved/bought it on Jan 12, 1926. there it sat in a cubby hole for who knows how many years. I think it must have been a long gone priest at the parish.

The leather on the edges is rotting a bit, but the pages, having been printed on fine stock are still quite good with the odd small tear here and there (which were mended by a bit of surprisingly long lasting scotch tape!)

I bet somewhere in the beyond James Houlihan is looking down on me thinking "thank goodness that missal wasn't just thrown out and is being used."

I like the inscription written in the nut brown ink: "Deus Benedicat Datorem Nunc Et In Saecula Saeculorum. Amen."

Well, amen to THAT donor, and James Houlihan as well.

And until Sept '09 I'd served my former parish as server, lector, EM, informal sacristan -- there's something wonderful about using things that have been around "forever."

The church is relatively young -- 1917 or so -- until about a decade ago, until the bells just got too unservicable, we had sweet handbells -- well the "clappers" were no more than crude washers and each of the four bells were of slightly different sizes and had little birdies on them and the handle was quite ornate -- but it gave pleasure to ring them, thinking of all the OTHER hands who'd once rung them -- and to think of all the people long dead and gone who'd heard those same sweet peals. Ditto the thurible -- how many funerals had that thurible been put into use for, high masses, Easters, etc?

There were still many altar linens who were seeing service when I left the church, from MY first days there when I was in my mid teens. How many washings and ironings had they been through. The sacristy altar bench was recently lovingly refinished. Handmade, not the greatest piece, but crafted with love all the same.

Father, your post reminds me of this ending passage from Brideshead Revisited:

"" There was one part of the house I had not

yet visited, and I went there now.

The chapel showed no ill-effects of its long neglect; the art-nouveau paint was as fresh and bright as ever; the art-nouveau lamp burned once more before the altar. I said a prayer, an ancient, newly-learned form of words, and left, turning towards the camp; and as I walked back, and the cook-house bugle sounded ahead of me,
I thought: 'The builders did not know the uses to which their work would descend; they made a new house with the stones of the old castle; year by year, generation after generation, they enriched and extended it; year by year the great harvest of timber in the park grew to ripeness; until, in sudden frost, came the age of Hooper; the place was desolate and the work all brought to nothing; Quomodo sedet sola civitas. Vanity of vanities, all is vanity.

'And yet,' I thought, stepping out more briskly towards the camp, where the bugles after a pause had taken up the second call and were sounding 'Pick-em-up, pick-em-up, hot potatoes', 'and yet that is not the last word; it is not even an apt word; it is a dead word from ten years back.

'Something quite remote from anything the builders intended, has come out of their work, and out of the fierce little human tragedy in which I played; something none of us thought about at the time; a small red flame - a beaten-copper lamp of deplorable design relit before the beaten-copper doors of a tabernacle; the flame which the old knights saw from their tombs, which they saw put out; that flame burns again for other soldiers, far from home, farther, in heart, than Acre or Jerusalem. It could not have been lit but for the builders and the tragedians, and there I found it this morning, burning anew among the old stones.'

I quickened my pace and reached the hut which served us for our ante-room. 'You're looking unusually cheerful today,' said the second-in-command."