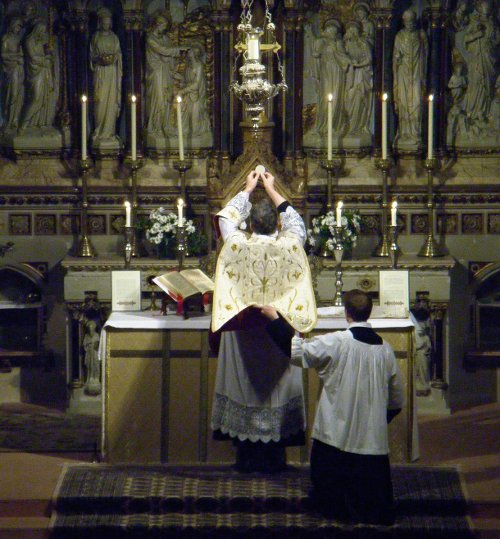 We had a Missa Cantata last night; I don't particularly like this form of celebration, its beige, not High Mass with all its majesty or Low Mass with all its austere silent beauty. I don't think God likes either, we don't do it much, last time we had one was the Feast of the Purification, and God sent snow and kept people away, and last night he sent snow and kept people away.

There was me, and Andrew in the sanctuary, just one server! Then there were five in the choir, including the indomitable Bara Brith from Blackfen, I was hoping to speak her afterwards but she and the choir had gone by the time I cleared things away. Then there were about another five in the congregation including Rosalea (I hope I have that right) from the Traditional Latin Mass Community Edinburgh, who had come over on the train via Bognor and Chichester, with her guide dog.

Was planning to come Father - whatever kind of Mass it was - just so I could hear an Epiphany Mass on the proper day. Wasn't quite so intrepid though! (Scared of driving on ice having tried it once yesterday.)

I'm sure that those who attended were grateful you put the Mass on, Father. I desperately wanted to get to an Epiphany Mass, but was too ill to venture out in the snow!

Roselyne only just made the train by a whisker! Well done for instructing us to leave at just at the right time!

We lucked out. Full high Mass. Priest, Deacon, Subdeacon. [The Deacon is a priest, and the subdeacon is a newly ordained deacon.] Two additional priests in choir. An MC, Thurifer, Cross Bearer, two candle bearers, and two torch bearers.

I've been two a few full bore high Masses this last year -- for some reason this one took forever. The choir parts were rather lenghty - beautiful, but lengthy.

On most Sundays the "high" Mass is a Missa Cantata. I think all the extra "wait" for the singing added a good 20 minutes to the Mass. But my guess is the priests were glad to be able to sit a bit longer and "kick it."

And for some reason the sermon was sort of lengthy. The subdeacon gave it, him recently have been given faculties for same. [Ah, well, he'll learn!]

packed church, with reception afterwards and "King Cake." Pan Dulce, with little figurines baked in. There was a drawing for prizes if you'd had a little figurine of the Baby Jesus, or whomever.

I like the Missa Cantata, normally. It usually seems to take about an hour, 20 minutes. I think the Full High Mass tends to overbalace the liturgy a bit through the creed It took about an hour and ten mintues to get to the offertory verse -- which kind
of front loads the full on ceremony

And the best part of it was getting to celebrate Ephiphany on the actual day!

IO got a fair amount of vid. last night, so with any luck I may be able to psot.

I'm impressed at your intrepid visitors, especially the one who trusted BR, with her guide dog yet! - I expect the others had taken sled dogs, at least the Telegraph gives the impression that that's the best way of travel over there right now.

Before the Universe warmed up we had cold & frosty weather this time of the year regular as clockwork.The main difference now is that Local Authorities' are too busy protecting their Pension Funds than looking after the people.

Dear Father The blog needs editing as you repeat the same paragraph twice. Incidentally I quite like Missa Cantata...in fact more than High Mass in a way...less fussy for me. I think that may be heresy though !

Say hello to Rosalind from us, Father! Hope you've not got as much snow as us, though...

Am intrigued, why not like Missa Cantata! I know it can be badly done, but when it's well done!?

Father
Missa Cantata can't be as bad as Missa Gran-tata where the grandmas clap enthusiastically at the songs the little ones sing to show what they did in the liturgy group ;-)

- or Missa Happi-clappica (well you know what goes on there)

With respect to Father's views on the Missa Cantata, I would like to point out its effect on those who serve at the celebrant's side. Though I would never imply that the Mass is something to be instrumentalised, I cannot help observing that at a sung mass with incense, the MC enjoys a particularly intimate and intense collaboration with the priest throughout the holiest part of the mass. It is, well, ineffable. To stand at the priest's side with the Sacred Host lying on the corporal before them is such an overpowering experience that as parish MC I made a priority of training other men (younger and unmarried, with the possibility of discerning a priestly vocation) to serve in my place. It's a blessing too precious to hoard for oneself.

Thanks to the weather, my work closed, and I was able to make Theophany in Eastbourne. Today I'd booked off for Russian Christmas at Bodium, but couldn't make the Liturgy because my wife won't drive her own car in the snow!

I like a Missa Cantata ,wonderfull things especially the way the Fraternity of St Peter do them.

Bless me Father for I was not intrepid yesterday!

Intrepid, indeed, Fr, for you to ensure, during all that bad weather, that good, faithful, Catholics had the opportunity to attend Mass on Epiphany. I'm impressed that good Catholics travel from Edinburgh to attend your Mass !!! And Blackfen !!! May God continue to bless you. in Domino.

It must be forty five years or thereabouts since I last served at a Missa Cantata. I remember rather liking it.

Surely any Mass celebrated with reverence is pleasing to God?

I prefer Missa Cantata with incense to High Mass it seems a more natural not so choreographed service but still having the beautifull music of High Mass.Gem I didnt think that a Cross Bearer was used at High Mass unless a Bishop celebrated.

I prefer Missa Cantata with incense to High Mass it seems a more natural not so choreographed service but still having the beautifull music of High Mass.Gem I didnt think that a Cross Bearer was used at High Mass unless a Bishop celebrated.

MC Man: you are correct, but it is the most often ignored rubric, and often understandably.

Father, I was saying much the same thing about the Missa Cantata just the other day. I find either a Low or High Mass much more satisfying; the Cantata is neither one thing nor the other - in fact a modern (18th century) compromise.

Sadly I wasn't able to attend an Epiphany Mass; the one at Maiden Lane (the only evening Epihpany Mass I could find in London) was cancelled.