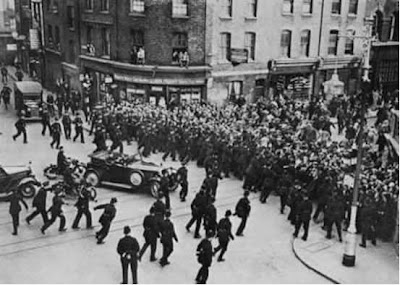 Zenit's Edward Pentin has a very good appraisal of the crisis in the English and Welsh Church over the Children, Schools and Families Bill. He entitles it "Opposition Builds".

He quotes Lord Alton's speech in the Lords and then goes on to say:


Yet so far the bishops of England and Wales have been silent on the bill or actively supported it. The chairman of the Catholic Education Service, Bishop Malcolm McMahon, wrote a long article in the London Times last week without indicating any objection to the legislation. (Some Catholics are reportedly already discouraged after he said recently that people in same-sex civil partnerships should be able to be head teachers of Catholic schools.)
The CES's director, Oona Stannard, insists the bill is a "positive step forward" and that Catholic schools would not be compelled "to promote abortion" under the legislation (despite Ed Balls, Britain's education minister, saying recently that Catholic schools "must explain how to access abortion"). But even if Catholic school children are exempt, campaigners say other children will still be vulnerable to the promotion of lifestyles that are against the natural law.
The absence of opposition from the bishops, which some charitably think may be tactical, has led to prominent Catholics such as Lord Alton and respected priest bloggers to formally protest on behalf of the Church. It's also been noted how laudably a Protestant campaign group, Christian Concern for Our Nation, has responded to the dangers of the legislation and its problems with regards to Home Schooling.
Some Catholics have taken the matter into their own hands and set up an online petition asking the bishops to speak out. So far it has attracted nearly 2,000 signatures.

He ends by mentioning the National Day of Prayer and Fasting (organized by the pro-life movement) on Monday March 14.
If you haven't signed the petition do so today!
at March 12, 2010

Another thing we can do to oppose this attack on our Faith is by writing to our Bishops, asking them to support us. Also sending a copy to the relevant department in Rome.

Pro Ecclesia has the addresses and suggestions on how to word letters here;

The addresses are at the bottom of the page.

I have long criticised the CES and have previously suggested that Bishop McMahon OP has been elevated to a position beyond his capabilities and knowledge.
I urge your readers to write to the Congregation for Bishops and other congregations in Rome.

'National Day of Prayer and Fasting (organized by the pro-life movement) on Monday March 14'.

Just spotted a typo error - shouldn't that be Monday 15th? I know because it's my brother's birthday!

Thank you for finding the strength to sign that petition. Can't have been easy for you or any other Priest. We all know you are with us Fr Ray in oppposing this unjust legislation being lauded over us by a morally bankrupt government! But why do our Shepherds who should be our fearless leaders, remain 'closed mouthed' over this crisis?!

The Bishops should be leading a Missionary Church not managing the erosion and decline of Core Catholic Values in E&W.

There are NO DEALS to be made with Sex Ed Balls, the government, the CES or any one on this issue.

IT IS NON NEGOTIABLE!

When a person becomes a Christian and they are striving to do the very best that they can to live the kind of life that the Lord wants them to, sooner or later they learn that they are going to be confronted with difficulties and challenges that are unique to being a child of God. And, indeed, there are burdens that we have to bear; things that, if we had never become Christians, we would never have to endure.

For example, ridicule from people who don't care for anything concerning the Lord. People of the world don't care about the values and the allegiance that we pay to our Heavenly Father.

The apostle Peter wrote, "In regard to these, they think it strange that you do not run with them in the same flood of dissipation, speaking evil of you" (I Peter 4:4).

St Paul wants us to understand that there is NOTHING that can defeat God's purpose for us, if we maintain our faith in Him. He says: "Yet in all these things we are more than conquerors through Him who loved us" (Romans 8:37).

And if our purpose is to suffer 'humiliations' at the hands of the world for standing up for what is right, then so be it.

Oona Stannard insists the bill is a "positive step forward" and that Catholic schools would not be compelled "to promote abortion".

Since on her watch Catholic schools will promote abortion anyway, I suppose she's telling the truth.

Perhaps one ought to try and understand the position in which the Bishops find themselves. Their silence obliges one to speculate but here is my take:

"We did not think Humanae Vitae was a good thing so we kept quiet about it. We have kept off feeding our sheep and if they have wandered off and our now upside down in a thorn bush we have devised pastoral solutions to assure them that their irregular position is quite okay. God still loves them and they will all go to heaven whatever they have done (surely a beneficial improvement on our dearly beloved Calvin). We have signed the Church up as a supporter of NuLabour because they will provide woollies for our upside down sheep which will further reassure them that being in a ditch is really okay.

So okay the Government is insisting on teaching the sheep how to misbehave but we are still allowed to tell the sheep that it is wrong to be upside down in a ditch - so that lets us off the hook (but note we are not obliged to them that it is wrong).

Now we have all these fundamentalists objecting. They have organised a petition which so far has few signatures and most of them are from the laity. And oh my goodness we have his Holiness coming in September and some of these same people have been telling him porkies.

We have had the CES working for us for years dealing with all those tiresome schools. Okay we may have been a bit remiss in not understanding what was going on but how can we now disassociate ourselves from them now? After all Mr Blair assured us that his Government did not do religion so we went along with everything they suggested - rid ourselves of our adoption agencies, allowed our leading Catholic Hospital to do what it liked and now we have negotiated a deal with this Mr Balls to keep our sheep properly informed on various flavours and alternative positions.

Can we really go back on this? It would be the most terrible climbdown. We would look awfully silly. We would be humiliated and we are sufficiently humble to freely admit that humility is not our strongpoint.

But then it might not happen. The Bill might end in the bin. That would get us off the hook. So PRAY, PRAY, PRAY that that happens and in the meantime do not say a word."

As regards Civil Partnerships then bishops are in a difficult position. As Parliament in its legislation never mentioned sexual intercourse , provided no means for the cancellation of a Partnership on grounds of non-consummation or sexual elationships outside the Partnership, then it can be regarded as merely an arrengement between friends for the sharing of inheritance, pensions, and state benefits.
However that is not the popular perception, as it is more and more dressed up to look like a marriage.

So what can the bishops do ,as NuLabour has carefully crafted its legislation so that the acceptance of what is innocuous in law does not lead to them being popularly perceived as having accepted what they regard as wrong?

As for Abortion the original act supposed it to be an occasional and even rare phenomemon which was hedged about with safeguards to prevent its abuse. The legislators thought they were merely dealing with hard cases and would not have supported any so-called abortion right. Reading the debates at the time makes this clear. They were taken for a ride by moral anachists and business interest who used the law to make money.

As a General Election looms then these questions should be raised with candidates so that everyone knows where they stand.

Santoeusabio - you have a wicked sense of humour!

It is wonderful to see that at last we have a 'medium' the CATHOLIC BLOGS, which we can use so effectively to communicate the frustrations and air our views and concerns on where the last five decades since
V2 have taken the Catholic Church.

With Holy Priests like Fr Ray posting on these 'most important topics for our times' we can tell it as we see it and yes even Rome sees it within hours (perhaps even minutes!) and hopefully comes to the rescue of the sheep who are now 'upside down in a thorn bush'.

No more do we wait in ignorance of current events until the 'Henry VIII type' modern political tyrants strip us of our Catholic Faith - NO!!!! We can and WILL fight back the onslaught from hell and it will be satan and his demons who will be on the defensive!

Read carefully Matthew 16:18-19 'upon this rock I will build my church; and the gates of hell shall NOT prevail against it', meaning that satan, his demons and hell will be crushed and defeated because they cannot secure and hold their gates against the pure light and love of God that pervades the entire universe and which we need to make known to all Creation.

That was and remains the Apostolic mandate!

Yes folks and with the demise of hell goes sex-education, same sex marriage, sexual deviancy and all the other horrors with which 'the powers and principalities, the rulers of darkness in high places' want to undermine the innocence of our children.