Holy Father on the Sacred Triduum 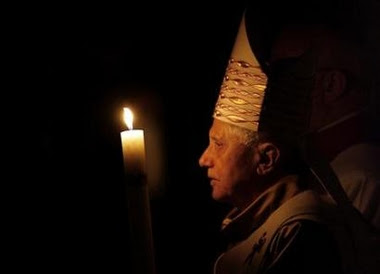 The Holy Father speaking today at the General Audience on the Sacred Tridduum:


Tomorrow, during the Chrism Mass the priests will gather with their bishops for the rite in which the oil for the sick, the catechumens and the chrism is blessed. On the same occasion, the priests renew the promises made on the day of ordination. "This gesture this year, takes on a very special significance, because it takes place within the Year for Priests, held to commemorate the 150th anniversary of the death of the Holy Curé of Ars”. To all the priests, the Pope reiterated the wish expressed for this year: "Follow the example of the Curé of Ars, and you let yourself be conquered by Christ. You too must be messengers of hope, reconciliation, peace in today's world.

Tomorrow afternoon, with the Mass of the Lord's Last Supper, we celebrate the institution of the Eucharist. In Jesus' words over the bread and wine "This is my body" and "This cup is the new covenant in my blood," said Benedict XVI “Christ’s intent is clearly manifest: in the species of bread and wine, He is present in a real way with his body and his blood shed as a sacrifice for the New Covenant. At the same time, He entrusts the apostles and their successors to be ministers of this sacrament, which he gives to His Church as the supreme proof of His love. "

During the same the act of Jesus washing the apostles' feet ritual is evoked, an act which "represents the entire life of Jesus and reveals his love to the end, an infinite love, that enables man to communion with God set him free. "

After the Holy Thursday liturgy, the Church places the Blessed Sacrament in a specially prepared place, "which is to represent the loneliness of Gethsemane, the mortal anguish of Jesus. In front of the Eucharist, the faithful contemplate Jesus in his solitude and pray for an end to all loneliness in the world. This liturgical path also invites us to seek intimate encounter with the Lord in prayer, to recognize Jesus among those who are lonely, to hold vigil with him and to know how he proclaims the light of his life".

Friday is dedicated to the memory of the passion and death of Jesus "There is - said the Pope - an inseparable connection between the Last Supper and the death of Jesus. In the first Christ gives his body and his blood, that is his earthly life, himself, anticipating his death and transforming it into an act of love. So he transforms death, which by its nature, is the end, the destruction of all relations, into an act of communication itself, an instrument of salvation and the proclamation of the victory of love. Thus, Jesus becomes the key to understanding the Last Supper, which is an anticipation of that transformation of violent death into voluntary sacrifice, into an act of love that redeems and saves the world. "

Holy Saturday is the day of "great silence. The churches are bare and there are no special liturgies. In this time of expectation and hope, believers are called to prayer, reflection, conversion, through the Sacrament of Reconciliation, in order to participate, inwardly renewed, in the celebration of Easter. " On the night of Holy Saturday the "mother of all vigils" takes place, when the silence is "broken by the song of the announcing the resurrection of Christ and the proclamation of the victory of light over darkness, life over death."

Your doing a great Father! Your blog is both informative & entertaining! Thank you for being outspoken!!!