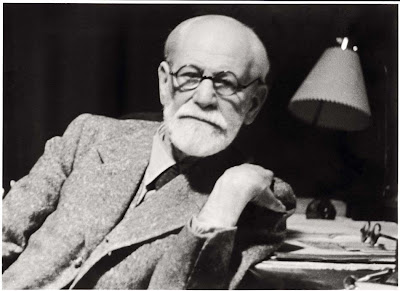 Just a passing thought, prompted by Shane's comment, remembering those Hampstead fondue dinner parties of my youth. We were all Freudians then, chatting endlessly about the "ids" and "egos". The wealthier and more arty spent hundreds of pounds going to their weekly therapy session.We saw everything in sexual terms then, most people and most psychologists then were rabid Freudians, a few were Jungian but most were Freudians. Children were viewed as sexual creatures from birth, sruggling with their complexes, hysterias and fantasies. The culture of the eighties saw children as protagonists in sexual activity, sometimes its provocateur but often just a fantascists. Popular Freudianism, the type embraced by social workers, teachers, journalists and leftist priests said children were not to believed and then if you added the Kinsey Report ...! Discuss.
Posted by Fr Ray Blake

It seems to me that accusations of child abuse are easy to make, difficult to prove or disprove, and very damaging in any case to the person against whom they are made even if he or she is proved innocent Both Nazis and Communists used alleged sexual irregularities against religious organisations, but the weapon of choice for enemies of religion now appears to be child abuse. This is not to deny that some has taken place , and, shamefully, in the same proportion as among the general population. One explanation for "cover-up" might be that many people believe in "innocent until proved guilty."

I can only imagine that Freud and Kinsey are now reaping the rewards of their work in each others company. There wasn't much of a cover up, many new what they were doing, even encouraged it, and were certainly happy with the results (however doctored). When I did my degree in Psychology in 1976, Freud was hardly even mentioned. He was termed a junk psychologist.
I think the 60s definately bred a me and myself mentality, heavily centred on promiscous sex. We are now seeing the rewards of this.
Girls no longer want to marry and have children. The choice of men/boys (who all just want to be lads) is hardly going to encourage them to forego their careers and free and liberal lifestyle to settle down and bring up children.
I am sure there are many good men out there (my husband is one for sure) but when I look around me, it is difficult to see in this Godless culture more than a few I would be happy for my daughters to marry.

Independent, while I agree with much of what you've said, the statistical evidence, at least in the US, is that priests who've been accused of child abuse are 4 times LESS than those in the general population. It doesn't excuse anything, but it's a lot less. I suspect this tends to hold true across all if not most countries.

As far as Freud, et al. I have always had a great deal of skepticsim re: psychologists., Who examines THEIR biases, etc? Many (though certainly not all, seem to discount relgious values, to the point of them labeling relgious people as either automatically "nuts" or "repressed" or some such. OFten, the way they word their questions try to paint people in a corner. For instance, the book "Goodbye Good Men" mentioned shrink types who'd insist on an answer to "Which do you prefer, looking at porn, or playing with yourself." And asking questions like "what do you think of your penis?" And questions along those lines. Essentially refusing to consider that in question #1 it's possible that for a normal believer in God, especially one who aspires to the priesthood would see both "options" as subjective sins, and something to try and avoid. And question 2 has no business being asked of a seminarian at all.

I think it was Freud who had weird sexaul hangups. And Kinsey? Got away with murder.

In college, out of curiosity, I perused the so called "Kinsey Report." Form the items surved, it should have set off red flags even at that time. No one seemed to question just HOW data was gathered as to whether it was a good idea to deliberately stimulate toddler aged boys as to how their genitals reacted to X stimuli. Oh, but since this was supposedly all done in the name of the "god", "science" then it must ("sarcasm", for idiot editors of the Argus et al need to be added here) have been okay.

When psychology denies the truth of what a human being really is, it's "science" is fatally flawed. You cannot study the physiology of a frog if you deny the existence of it's legs. Likewise you cannot understand a human being truely without taking into account the supernatural aspect of his reality. Psychology with neither the recognition of the triune God, the Redemption, the Natural Law and the reality and understanding of sin is, and always will be a joke.

I have no doubt that the Freud and Kinsey had a detrimental effect on society. However, what truely Catholic Bishop, priest or layman would not consider them out of their trees. How could anyone take people like these for experts when they had such a truncated and perverse view of humanity and little or no understanding of sin?

As regards covering up being sourced to Kinsey and Freud. My goodness these two were distrubtors of literature that WAS pornographic. They disclosed, promoted and intellectualised perversion. They covered up nothing. Covering up is natural and good. It is the correct thing to do with sin. We hide it. Sin wounds, the knowledge of another's sin wounds us too. We should not be privy to the thoughts and actions of others, especially the more sinful those thoughts and actions are, if all we are going to do is absorb information. It is no surprise to watch the media slobber over the trough regarding pederasty and pedophilia. Filth is their jam and they love to spread it. I have no problem at all with any abuse victim or Bishop who would seek to conceal this filth. The problem is not to be found in concealing the filth but in the failure in dealing with the person who perpetrated these awful deeds. Why they were not taken out of public ministry and placed in a closed monastery at least, I do not understand. If that were not possible and the perpetrator was released into society then the police should have been informed (however, there were cases here in Ireland where the police choose to ignore, despite the Bishop's insistence, very few of course. Most involve cases of dereliction of duty regarding the imposition of canon law). I can understand and fully support "going public" regarding real victims whose complaints were not dealt with by our Bishops but it would never have come to this if the Bishops applied the rules of the Church and were fervent in the Faith.

It seems to me that essentially what these people did with their consultations and surveys was to hear confessions. But instead of taking a holistic view, their conclusions were focused on only one aspect of the human condition. Did they kid themselves they were being objective whilst indulging in a rather dubious brand of prurience?
Their many acolytes broadened the brief of what might generously be called an inexact science into holy writ to be applied universally. They are still doing it. It’s a do-what-you-like ticket because the blame is never yours; it’s always the fault of something or someone else.
The denial of free will and personal responsibility has been the great bedrock of the victim culture as well as the cult of endless self-obsession. From the people I know who have had therapy it sounds like an hour-long confession in which you talk about yourself incessantly and are then told you can’t help it, come back next week.
I stand to be shot down but for me “love the sinner, hate the sin” is in the same mold, as if sins somehow commit us rather than we knowingly commit sins and need forgiveness through repentance and a firm purpose of amendment But that means we have to acknowledge that we and we alone are responsible for our actions. If it’s not our fault, then we really don’t need the Sacrament of Confession.
But, hey, we’ve now moved into the more enlightened 21st century: it’s not me, it’s my genes.

Georgem,
Let me be the first to shoot you!

You are right, in the sense adultery makes a man an adulterer, we should hate adultery and in that sense hate the adulterer, but then Christ would call us to see more in him than just the sin. Furthermore we are called to see what Grace can do in him.
Also Christianity, especially Catholicism, teaches us that we all have the potential for horrendously bad or good acts.

Father, I know what you are saying is right, but to love the sinner and hate the sin, when the sin is something we have difficulty living with is Divine. Your example of adulterer would have so many implications. Forgiveness would be hard but fogetting would be impossible. But I guess we are all striving for that level of love.

Okay, reverend. You got me. Here, here and here. Clunk.

This is a extremely informative column in today’s Irish Independent by Patricia Casey, Professor of Psychiatry at University College Dublin, consultant psychiatrist at the Mater Misericordiae University Hospital, Dublin, and editor of the Psychiatric Bulletin: