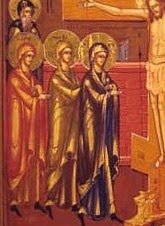 They shall take some of its blood
and apply it to the two doorposts and the lintel
of every house in which they partake of the lamb.

And when the Angel of Death came to strike down the first born of the Egyptians, those dwellings marked with Blood of the Lamb were spared, death did not enter those houses, the Blood of the Lamb saved them!
The Cross is our doorway, it is not just the Blood of the Lamb which marks the doorpost and lintel, it is the Lamb himself. The saving Blood of the Lamb flows down on those who gather under the Cross.
It is the Cross alone that is the portal into the New and Eternal Covenant. Those who stand under the Cross are drenched in His blood. They are the Church, marked as His Blood brothers, the adopted Sons and daughters of God.
His Passion begins with His given of His Body, which is broken for us, and the pouring out for us of His Blood, the Blood of the New and Eternal Covenant poured out for us and for the many. And on this night of blood in the Garden of Gethesemine his blood continues to flow as He sweats blood whilst He prays to the Father for us.

From the Last Supper to the Cross there is the trail of Blood, it drips in the floor of the chamber of the Sanhedrin and in Pilate's Palace crying out for Justice, blood that is trampled on and ignored. Josephus tells the Temple was ankle deep in the blood the slaughtered Passover lambs but there is blood in the city, Jesus' blood, the Lamb's Blood, dripping on its streets asnd pavemrents, those who come in contact with Jesus are touched by His Blood, the executioners, Pilate, his wife, Caiaphas, the crowd, his Blood is on them and on their children, it is trample on and counted as nothing, some embrace it as the precious thing on earth. His Blood is on His Mother, on Simon of Cyrene, on Veronica, on John, on the women, the centurion, the good thief, on Joseph, Nocodemus and the Centurion. It brings life and death Eternal. It marks a doorway where we can either enter or leave. Judas chose to leave, Mary, John and the women chose to stay.

At the Crucifixion it pours out in profusion, it flows out on the faithful, it brings back the disaciples. It flows down into the underworld, into Adam's grave, onto the dead. It flows out into the world, into time and space, touching the very foundations of the Cosmos. It pours like a torrent through the Church, wherever a priest takes bread and wine, it both saves and drowns, it washes and stains, saves and judges.
To those who drink of it, who wash their robes white in it,  to those who embrace it, it brings life and health, to those who trample it there is judgement.
It marks the doorposts and the lintels of the hearts of the faithful, it marks their lips and their minds, it brings Life Eternal. It marks Holy Church, the bride brought at the cost of His Blood.
at April 01, 2010

AMEN.
Thank you for that meditation.

Thank you Father for that very profound and beautiful meditation. 'The Cross is our doorway' indeed through which we can either 'enter or leave .' We all have the free will to choose - may we have the courage to enter.