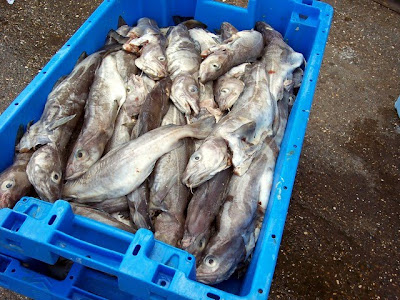 Today's Gospel in the Ordinary Form is the post-resurrection miraculous draft of fishes. Peter hauls ashore One hundred and fifty three of them. Canterbury Tales indulges in a bit of patristic numerology to answer the question, "Why did St. John record the exact number?"

What is the significance of the number 17? The number was a sign. St. John has a special love for the number 17. The 12 extra baskets of bread from the five barley loaves adds up to 17. (St. Augustine said that it represented the gifts of the Old and New Covenant - the Ten Commandments and the Sevenfold Spirit.)

You have just answered one of Fr Mildew's fiendish Easter quiz questions for free. I thought I was a cert to be the only one able to answer it because I got it earlier, having read this month's Fortean times. Curses!

Thanks for the exegisis. For a while there, it sounded like Louis Farrakhan rambling on about the number 19!

The version which Fr. Don Kettle, the priest who said Mass where I was, yesterday, Friday 9th April, said that 153 is the number of types of fish in the Sea of Galilee. This then represents all types of people on earth and the Church thenceforth, had to go out to all peoples on earth. I do not know if 153 is indeed the total of types of fish in that sea, but I didn't question his statement at the time.
JARay

Or maybe Peter actually did haul 153 exactly. Matthew, the tax collector might have insisted on an exact count. John may have simply recorded it. Either way, the haul was exceptional and it is well within sense to think that they would have counted them as a matter of course. It's hardly trawl fishing on an industrial scale like today. Every fish would have mattered to them. They probably kept records of the largest catches and this one, being exceptional might have got an exact count.

The 1910 Jewish Encyclopedia reports that a three-year Torah cycle used in Palestine around the First Century had 153 Torah portions. “The 153 parts into which the Torah was divided in the cycle of three years, which prevailed in Palestine till the exiles from Spain brought their customs into the Holy Land, are known as 'sedarim'.'
http://cantuar.blogspot.com/2010/01/why-153-fish-in-johns-gopsel-jewish.html

And of course the CUBE is the shape of the Holy of Holies.

Fishing is now banned in the Sea of Galilee.

If Saint John says it was 153 perhaps it was 153. Why do people look for such complicated explanations? It's a story about the superabundance of God's care.
I'm glad he didn't stop counting at 40 or someone might even suggest that number worthy of comment.

When I was in my former parish, one of the older servers, Teresa, and I used to fairly frequently talk about the gospel reading, and often the same things would strike us as an odd detail, or phrasing etc. One Sunday, as Father read out that passage, our eyes happened to catch across the sanctuary when Fr. said "153 fish..." We both had to quickly look away because it was one of those moments you KNEW exactly what the other person was thinking. We both tried to imagine the conversation that might have gone on. There's John sitting around writing this down .... "Hey, do you remember how many fish we caught that day bubba? Was it 165 fish or 153? I can't remember." Bubba: "153, I remember we had to count three times, because Peter kept sining '99 bottles of beer on the wall, just to tick us off." 153 was such a *specific* number -- not "around 150" or "a whole boat load" but it was exactly what stood out. Teresa's mom thought we were both nuts for finding the same bit of mirth from it, but maybe you "hadda be there." But you did give us a "freebie" - shortly after I read this item I ran across Fr. Mildew's quiz@

In my monastery we ate fish this Friday. It was lovely to come from the Conventual Mass at midday to the refectory to eat fish, after hearing the Gospel. 'food for thought'.I must say, I did not think much about how how many fish were caught. I thought about our risen Lord (Thursday of Friday's Gospel ?) eating a piece of fish, a simple act of love for the apostles. A beautiful Gospel.

I thought you all might like to know that another explanation for this very fishy number has been that values assigned in numerology to the Greek letters for Mary Magdalene ("the magdalene"--sorry, can't do greek letters here) add up to . . . you guessed it, 153.