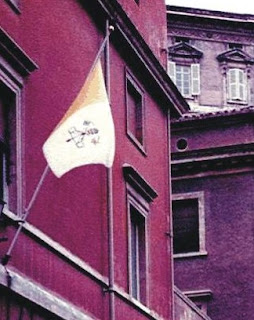 Nothing has thrilled secularists more than the call by some Catholics for the Papal visit sto be downgraded from a state visit to a pastoral one.
That seems to misunderstand the importance of the Holy See on the world stage. Ms Pepinster gives some background to the FCC memorandum, usefully she recaps the cosying up to the Holy See by our government over the last eighteen years. Whilst secularists might be unable to see the increasing importance of faith on the world stage, that is not the position of most governments. The Holy See because of its non-partisan neutrality has become a useful channel for dialogue with those governments which we don't officially speak to. For example the Iranian embassy to the Holy See is its biggest, staff-wise, in the world. Diplomatic relations with the Vatican offer a back door to Europe without the political posturing that takes place ast the UN.
The discretion of the Holy See makes it such a useful meeting point for public enemies to privately communicate, even if it is through a third party.
at April 30, 2010

The State visit of the Pope to the United Kingdom may have been an important opportunity for British diplomacy which has now been lost simply because some officials did not have the nous, intelligence or background to realise what might have been.

Great point re: the political posturing at the UN. My own motto echos many in my own country: "Get the US out of the UN and the UN out of the US."

Put it in some backwater country...and then see how many world-wide pencil pushing bureaucrats really want to go THERE and watch self-indulgent elitists prattle on about THEMSELVES being in charge of everything. Waste of time for too many tinhorn 3rd rate world "leaders" who shouldn't even be allowed to run a lemonade stand, much less run their own countries and try to enforce their own screwed up weltenschaung on the rest of us to make the successful countries go on a guilt trip.

I was pleased when under Reagan's administration full diplomatic ties with the Holy See were established. There was a lot of back door communications during the Solidarnost days in particular. vis a vis these back channels.

There is an excellent article by TIME here regards the Pope and Reagan working out the best way to help undermine Poland being in the Soviet Orbit (and ergo, a driving wedge for the collapse of the iron curtain states and evntual the Soviet Union as a political entity.

In the 30's Mahatma Gandhi was invited to visit us and the "thinktank" thought it would be a good idea to show him what a problem he had caused our cotton industry by his activities.

The authorities were flabbergasted when they sent him up North and he was cheered by the unemployed Mill-Workers.

It's the same bunch of Public-Schoolboys swho are "arranging" the State-Visit of His Holiness.

They are a completely different TRIBE