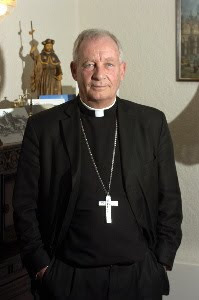 The Archbishop Peter Smith of Cardiff has been appointed to Southwark, Fr John Boyle has his CV etc.

The Archbishop, many would consider the voice of wisdom and experience in the hierarchy, will along with Vincent Nichols, will make for a strong episcopal presence in the UK's capital. To move an Archbishop is perhaps not normal but presumably shows the regard Rome has for London's second See. Also I think ++Vin and ++Pete will make a dream team complementing one another, certainly as far as the media are concerned. It also gives room for the appointment of a Welshman to Cardiff.
His appointment is interesting following the Ad Limina visit when Rome and the Holy Father were able to see and meet the whole hierarchy. It is perhaps significant that those much tipped for the appointment were not appointed, though that is often Rome's way.
I am sure that his appointment will be very welcome in Southwark.
at April 30, 2010

It is a sad day for this archdiocese (Cardiff). But as you say Father, it does indeed pave the way for a Welshman to hold the office of Archbishop of Cardiff.

His welcome will be great indeed. We need someone now who already knows the diocese very well and is therefore well placed to deal with the problems we have due to several priests retiring or falling ill all at once, and of course in general.

Why all the rejoicing remember his Eat Anglia days when he gave his imprimatur to a very dodgy textbook.

Three dioceses (East Anglia, Cardiff and now Southwark) that must be a record?

Why should we want a Welshman in Cardiff? Surely we want the best person for the post (and there ain't that many suitable Welsh candidates).
Cardiff is a spiritual desert thanks to the Archbishop (largely).
The Cathedral is a disgrace and looks more like a Masonic lodge than a Catholic Church.
I feel for Southwark. This is the real magic circle at work.

From what I read on Damian Thompson's blog, this appointment is hardly a welcome one.
JARay

A very large proportion of the territory of the Archdiocese of Cardiff is in fact in England.

Richard this is not a record.

George Andrew Beck was Bishop of Brentwood, then Bishop of Salford, then Archbishop of Liverpool.

And there may be others I am unaware of.

The Apostolic Nuncio certainly has his work cut out in Wales. First to find a new Archbishop for Cardiff and then a new bishop for Wrexham when Bishop Regan retires later this year. I would not envy the person who is appointed to Wrexham, as the poor bishop, has to sustain daily personal attacks from one of his priest bloggers. There are very few suitable candidates in Wales for either posts. One whole deanery in Wrexham diocese(St Garmon's deanery) is served entirely by Indian missionary priests.

@Shepherd.
There are a few Welsh candidates though. The Abbot of Belmont is both liturgically and doctrinally sound, and being as Belmont has a few vocations now it proves something is happening there, be it good or bad! Also, one of the brethren is to be ordained this year. Also, the Cathedral Dean (minus the LMS incidence) is seemingly without a blemish against his name - not to mention the rest of Wales for to make a sweeping statement like 'there ain't that many suitable Welsh candidates' would be foolish for me to do, as I don't know every single priest in Wales...

As for the Cathedral, that has nothing to do with Archbishop Peter, but his two predecessors.

It was +Murphy who rearranged the sanctuary (moving the cathedra in front of the then high altar) and I believe it was +Ward who finished the job by dismantling the high altar leave the 'free standing' altar, and creating that massive sanctuary.

+Smith didn't have the funds to do anything, hence the fund-raising both for the diocese and the cathedral.

Also, it is odd for a bishop to be moved from one archdiocese to another, in this country.

If it does happen its usually from; Southwark, Cardiff, liverpool or Birmingham to Westminster. +Peter moving to Southwark is strange.

On a side note, this is the first time an archbishop of Cardiff has been translated to another See.